Our Lady of Caysasay is a celebrated 17th century image of the Immaculate Conception. It was canonically crowned in 1954 and was later given the title the “Queen of the Archdiose of Lipa.

It is said that a man named Juan Maningcad found this while he was casting his net in the nearby Pansipit River, as depicted in a painting near the entrance of the church.

Translation: Juan Maningcad and the Virgin Mary in Pansipit River

I found the Church very simple from the outside.

Its ceiling though is very pretty.

Here’s a collage of what else is inside the church: 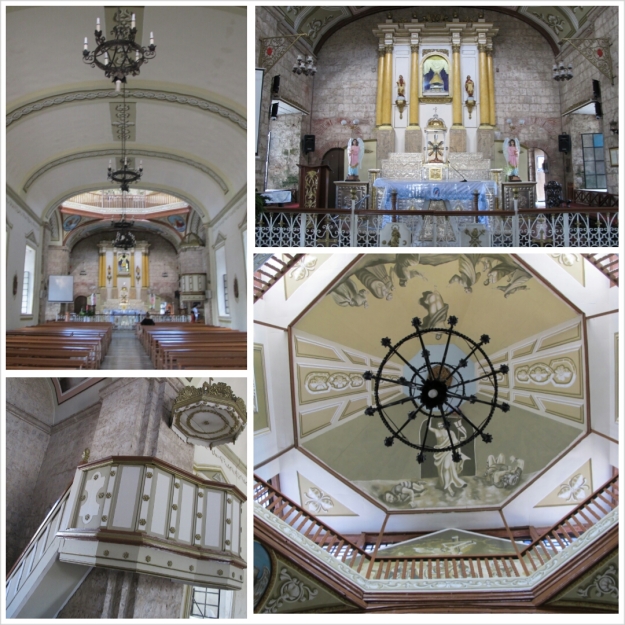 Going back to the Our Lady of Caysasay’s history, some believe that she saved the town during Taal volcano’s eruptions.  There were also many accounts of the miracles she performed and her apparitions.

After looking at the church, we decided to go to the Sta. Lucia Wells where locals say the Lady’s reflection was seen.  This well was about a five-minute walk from the church. Getting here was not hard since there were a lot of tour guides in the church. What I found fascinating was that the “tour guides” were all children. I chose the one who who was the least pushy (some would tug at my hand or incessantly plead that I take him/her).

As we walked from the church to the well, my eleven-year old guide Michelle shared stories of how in olden times, the statue would momentarily disappear from the church, get sighted at the well, then again reappear at the church.  I also got to know her better. She’s the eldest in a family of 5 and augments her parents’ income with her earnings from being a guide. She does go to school, but stopped for a year to help her family.

At the well, Michelle pointed these out: the beautifully carved stone dome made of coral stone with carvings of the Lady, and the healing spring.

Beside it was a gated statue of the Lady. Michelle told me to light a candle and make a wish, saying many have done so and returned to share how their wishes came true. I was brought up a Catholic, but over the years, I’ve become a non-practicing one. I’ve become quite the skeptic too so I wasn’t really buying it, but she was so earnest in asking me to make a wish that I relented. “Sige na ate, mag wish ka kasi nakikinig talaga siya. Maniwala ka lang. Tapos magdasal ka.  Balik ka rito ha kung nagkatotoo na wish mo.” (Go on, make a wish because she does listen. Just believe, then pray. Then come back when your wish came true).  Still unbelieving but with hope in my heart, I lighted the candle, closed my eyes and just for the fun of it, made not one but two wishes.

Three weeks later, my first wish came true. I shrugged it off as a mere coincidence, but about four months after, my second wish came true. Though I’m still a little skeptical about it, I promised to myself that when I come back to Manila, I will revisit the church and well and light a candle. But this time, it is not to wish, but to give thanks.

I will end this post by sharing a photo of Michelle who not only guided me to the well that day but, in all innocence, asked me to believe and taught me a thing or two about faith. 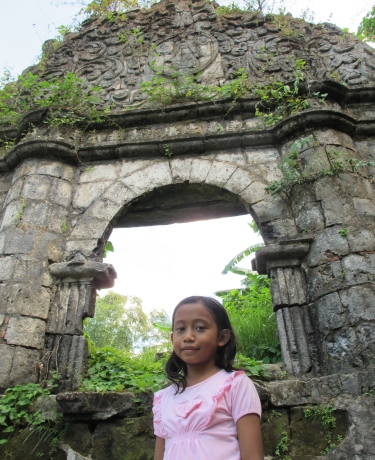