This observatory is located in John Hancock Center, which is, as of this writing the fourth tallest building in Chicago and the seventh tallest in the US.

Because I already saw Chicago’s skyline at daytime when I visited Willis Tower, I made it a point to visit John Hancock at night. Here are my first views from the observatory.

The building is located along the city’s Magnificent Mile and soars 1,000 feet above Lake Michigan so it offers beautiful views of downtown Chicago.

I got lucky because when I was there, it was at dusk and after I crossed the skywalk, I got to view the sunset.

Here’s a panoramic shot of it.

Pardon the photo quality, as this was taken using my mobile phone.

Later, because my tummy was rumbling, I decided to have some snacks in the observatory’s Lavazza Espression.

It was a chilly night so my White Chocolate Mocha was the perfect way to warm up. And their Blueberry Muffin complemented it perfectly.

After my yummy snacks, I resumed to taking photos of the beautiful night views before me.

The above view is that of Chicago’s lakefront.  Isn’t it amazing?

The observatory also gave me good views of Navy Pier.  Too bad my camera could not zoom in well and it was too dark so it was a challenge to take good photos. 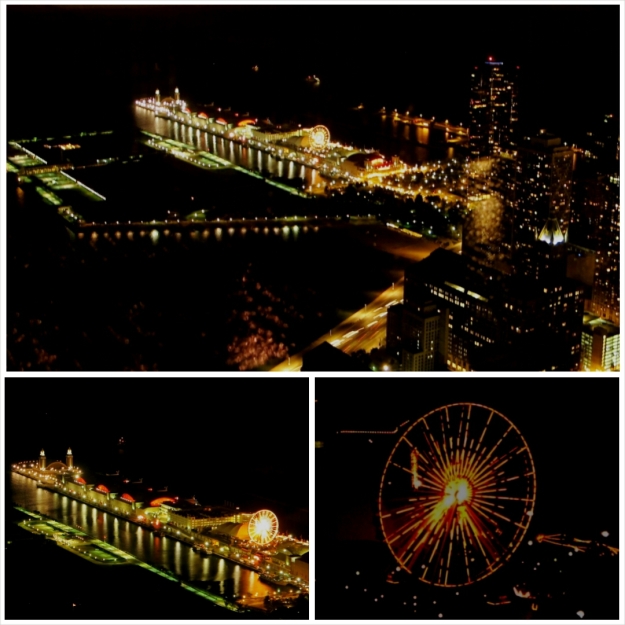 The queue to the aquarium’s entrance was long.  Thankfully, I had a CityPass so I did not have to line up.

After exchanging my Shedd Aquarium pass for tickets, I took my time discovering the wonders of this famous Chicago attraction.

Rivers, Islands, and Lakes
In this section, I was introduced to different species of freshwater fishes from around the world.

But my most interesting finds here would be the following: the pig-nosed turtle, which is a turtle specie native to northern Australia and southern New Guinea.

Piranha, which we are familiar with, of course, because of the many movies about them.

Isn’t it interesting how they look innocent in these photos when in movies, they are portrayed as aggressive, insatiable predators?

And finally, the Bahamas Andros Iguana, turtles and a lone shrimp. 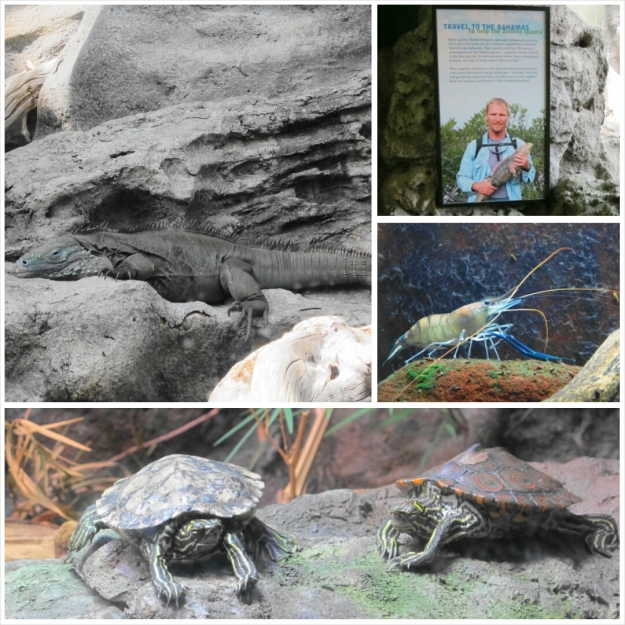 While I was able to identify the black and yellow one as a Bumblebee Dart Poison Frog, Google was not specific about the orange ones. 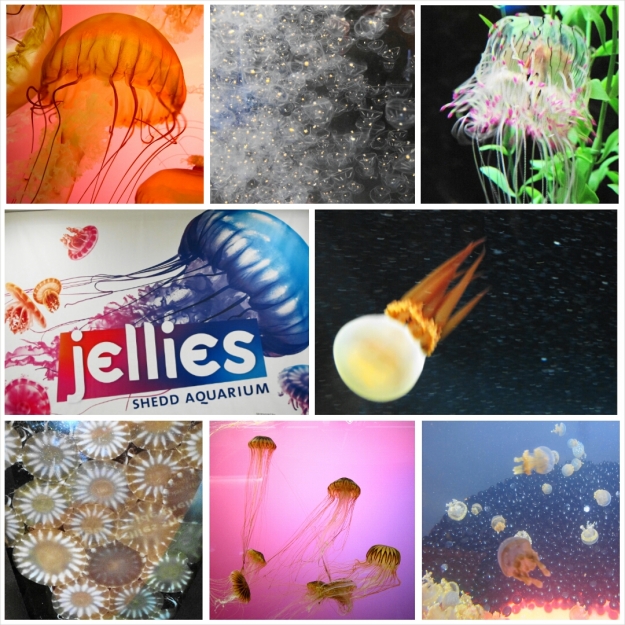 I had been to Manila Ocean Park and Hong Kong Ocean Park’s jelly exhibits, but I was still in awe when I saw Shedd’s mainly because their jelly selection is more varied. 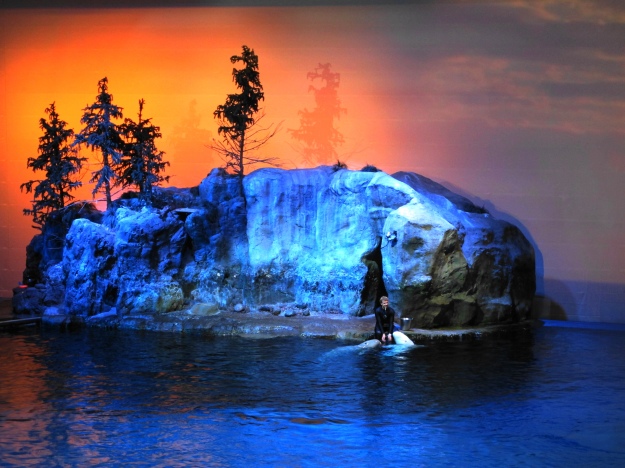 I took the 3:30 PM schedule for this show.  Seating was available 30 minutes prior, but because I arrived late, I was not able to get good seats.  Still, I enjoyed the show, which featured beluga whales.

A trivia:  Beluga whales are usually born gray.  At one month, they gradually lose their pigmentation until they reach their white color at the age of 7 in females and 9 in males.

Aside from the whale show, a penguin was also introduced (sorry, I only had one clear photo since I was seated two far from the front) and a dog, which they rescued when they knew it was neglected and abused.

Lastly, there was this dolphin show.

Wild Reef
I was proud to see this exhibit, which is of the Philippines.

I did some diving and snorkeling in many of my country’s waters, and know of our rich coral reefs, and it was heartwarming to see these shown in a different country.

It’s amazing how the Chicago office of the Philippines’ Department of Tourism was able to create our traditional bahay kubo (wooden houses) and the usual beachfront scenes in many of our islands.

Amazon Rising
This is a forest recreation of the Amazon River and the surrounding jungle and features fishes, stingrays, turtles, and whatnot.

Some interesting creatures include the Giant Peruvian Cockroach, the Emerald Tree Boa, the Dyeing Poison Dart Frog, and a monkey specie that I was not able to identify.

Of the above, the monkey was the most difficult to photograph because it kept hopping from one branch to another, but my patience at standing still in front of it was rewarded with this shot.

More memories of Shedd
I also watched Ice Age in its 4D Theatre (sorry, I have no photo of what I saw because taking photos was not allowed), interacted with stingrays at Stingray Touch, viewed penguins and sea lions up close and saw Shedd’s Coral Lab. 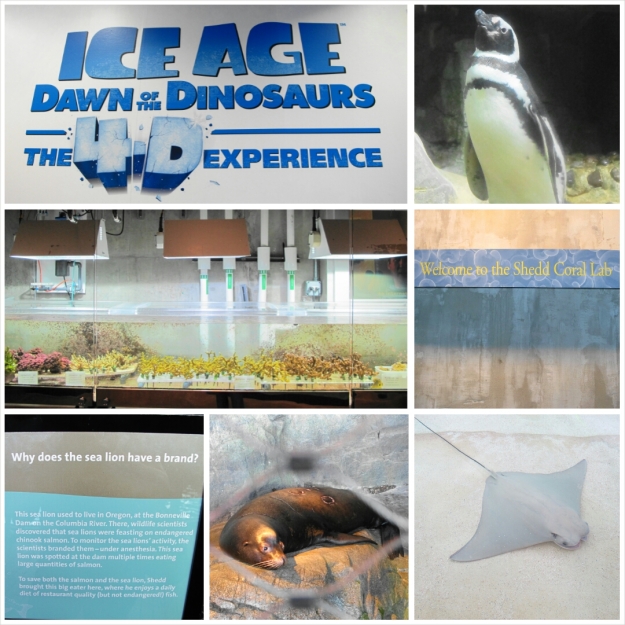 More interesting water creatures
Aside from these colorful fishes at Shedd Aquarium, 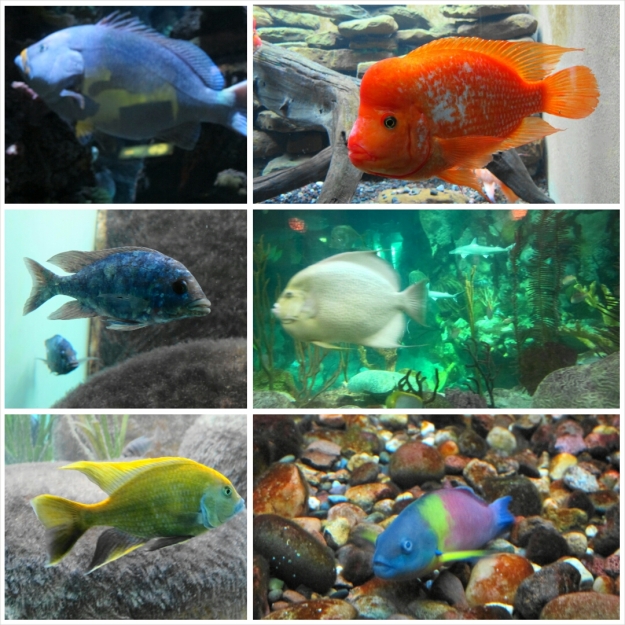 There were other interesting creatures too that unfortunately, I cannot identify (and too lazy to Google, te he!)

When I visited Willis Tower (formerly Sears) in 2013 and as of this writing, it is the 2nd tallest building in the USA and the 8th tallest freestanding structure in the world.  It was in my to-do list when I visited the windy city because I read in a travel guide that when in its view deck, one can see three states of the USA.

This is the entrance where I was dropped off.  Before heading to Jackson Boulevard, I took an ant’s point of view of the building.

I had a Chicago CityPass voucher so my visit to SkyDeck Chicago was most convenient.  I skipped the long lines and was immediately accommodated on the Fast Pass Lane.

Before reaching the view deck, we watched a show about the history of this iconic building, and the information that stuck to me was this:   At the time of its completion in 1973, it was the tallest building in the world, and held this rank for nearly 25 years.

When we were finally at the view deck, I was amazed at the views I was having.

Just look at how this amazing city developed their spaces:  tall buildings coexist with their parks and public spaces and gardens and with Michigan Lake.

Here’s a collage of my views of John Hancock Center (I also visited this iconic building and will blog about it in a future post) and Chicago Sun Times and the roadway below.

Here are more panoramic shots of my view at the deck.

It’s summer when I was there so the views were clear and stunning.  I’m not really familiar with what I was seeing, but I overheard an American guy tell his children that the 4 states that can be seen are Illinois, Indiana, Wisconsin, and Michigan.

My most memorable experience in the tower is stepping over the ledge, which was unveiled in 2009.  These all-glass boxes allow visitors to look through the floor on the street 1,353 feet, 412 meters and 103 floors below.  Whew!

This is a must-do when here.  Just be prepared to wait because not everyone is up to the challenge.  It was amusing to see people hold on to their family members as they wailed, “No, nooo, I can’t do this!  I’m scared!”  But there were daredevils too who, once on the ledge, would jump to their heart’s content and were unmindful of the dagger looks from the scared ones.

What more, as I tried to find my way, I found this cool art installation of denims with flowers.  And there’s a smaller Willis Tower signage too!

Just like my Batanes thread, this is another late post that I got inspired to making only when I watched an episode of Criminal Minds Suspect Behavior, which was set in Chicago.

I did this trip in June last year as mentioned in this teaser post.  It was work-related thus, my visit to Navy Pier was for the welcome dinner for the participants of the event that I attended.

According to Wikipedia, Navy Pier is Chicago’s number one tourist attraction.  Its attractions include sightseeing tours, the Chicago Children’s Museum, an IMAX theater, and the Smith Museum of Stained Glass Windows.   It also has a convention hall, which was located at the far end of the pier and was our welcome dinner venue.

We passed by some of the pier’s attraction on the way to the convention pier. 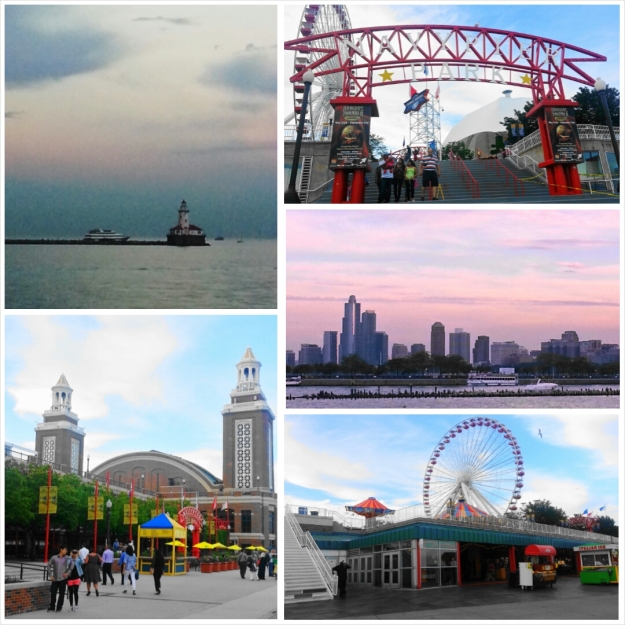 Here’s a panoramic shot of Lake Michigan and Chicago’s skyline at dusk as viewed from the pier.

I love the pastel colors of the sky and the stillness of the lake, which were evident in the above and below photos.

Pardon the photo quality as this was a zoomed-in shot using just my mobile phone, though I’d like to think its composition made it looked like a painting.

More random shots of our view on our way to and while in the convention center.

The sun was already calling it a day when we were enjoying dinner.  And what a dramatic exit it was!  I had to leave my table when I saw the sky become a beautiful canvas of blue and white and yellow. 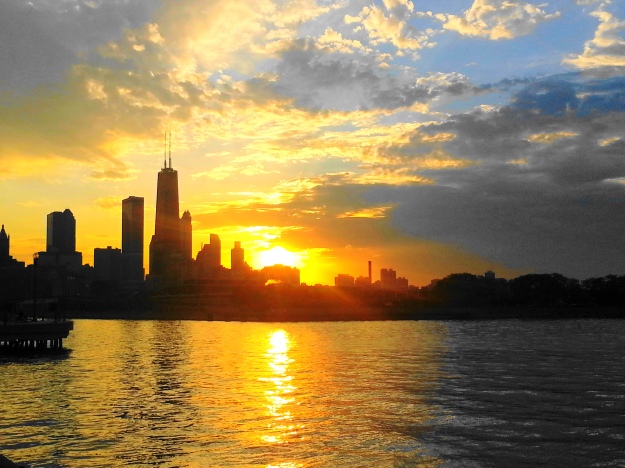 Before my very eyes, the brilliant sky changed its color to stunning hues of pink and orange. 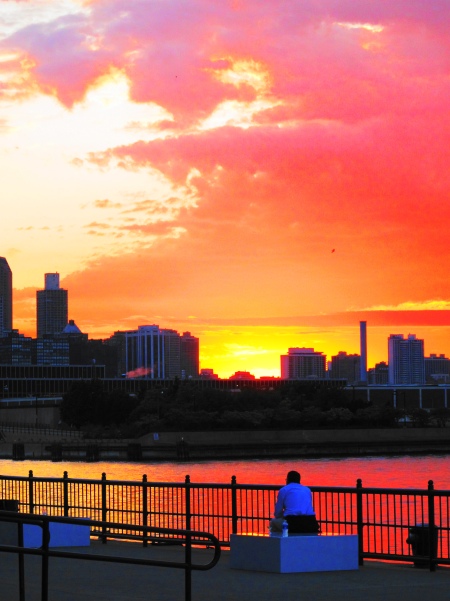 Initially, I had difficulty getting good photos because people were crowding around the railing but I got lucky to have taken a shot of a solitary man enjoying the beautiful view before him.

And as I watched, the sky again metamorphosed into deep hues of periwinkle (I’m guessing the color here based on my Crayola kit, te he) and orange and red. 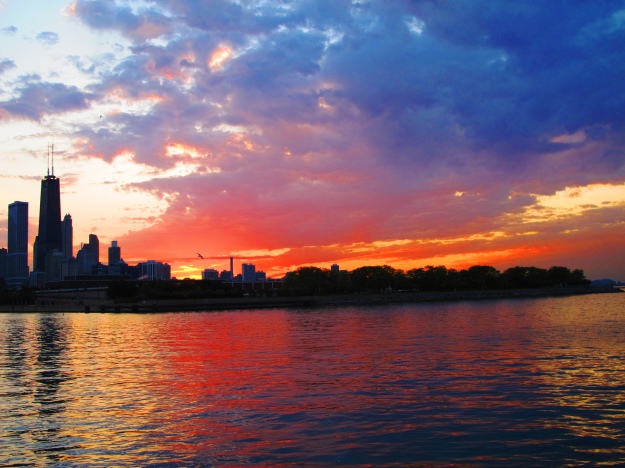 Come night time, the view was quite as interesting. 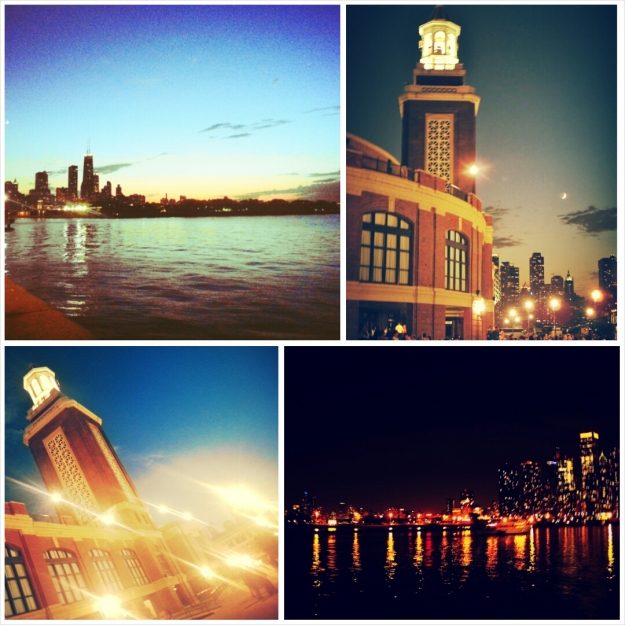 For someone who grew up in the province with no tall buildings and definitely no skyscraper, it was beautiful to see all the bright lights against the stark darkness of the night.

Our welcome dinner’s highlight was the fireworks display.  It was so beautiful and worth staying up late for. 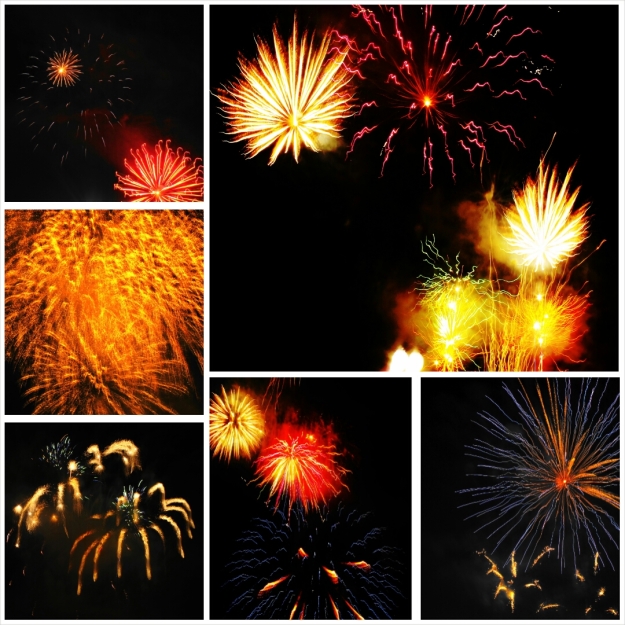 On our way home, our gracious host, a Filipina who had been in Chicago for over a decade, urged us to go inside the Smith Museum of Stained Glass Windows, which opened in 2000 as a permanent exhibition dedicated solely to the art of stained glass windows, of course.

We only passed by here as it was already closing time when we arrived, but the above views were enough to make me appreciate the intricacy with which the artists worked on each individual piece.

Lastly, I’ll end this post with what is perhaps the Navy Pier’s most popular attraction:  The Ferris Wheel.

This 150-foot Ferris Wheel opened in 1995 and operates year-round.

before sunset at Fisherman’s Village, Batanes

Everything’s a matter of perspective.  And I thank my lucky stars that regardless of what life brings me, I always see beauty in anything.  Sure, my rose-tinted glasses sometimes darken but just when they get too dark, hope bursts in like a ray of much-needed sunshine.

Lately, things have not been going as well as I hoped.  Worse, some people have been weighing me down with their negativity.  It was so continuous an onslaught that I almost caved in.

Thankfully, I have my crafts to keep me busy when I was not yet ready to come to terms with everything, my songs to help me release my emotions (think of me belting out the lyrics from Puddle of Mudd’s Blurry, Sara Bareilles’ King of Anything, and Lily Allen’s F*ck You with great gusto), and this blog as an outlet.  More importantly, I have my loved ones to draw strength and laughter from.

I’m still not really okay, and there are moments when I still feel like flipping the middle finger, but I take comfort in the fact that so long as I look at the brighter side of life, there will always be something to keep me going.