Since last week, the weather has been really crazy. It’s very sunny in the morning then in the afternoon, the skies become cloudy. Come evening, the rains are torrential and there are even days when the thunder is scarily loud.

Today is no different and while I have been cursing the very unpredictable weather for days now as I have a trip scheduled on Friday, this view makes me appreciate the beauty that only this week’s dreary weather can bring.

Isn’t the skyline so dramatic?

When I took the above photo this afternoon, it had not rain yet, but minutes after, it started drizzling so I had to stop my shoot, but not before taking this shot. 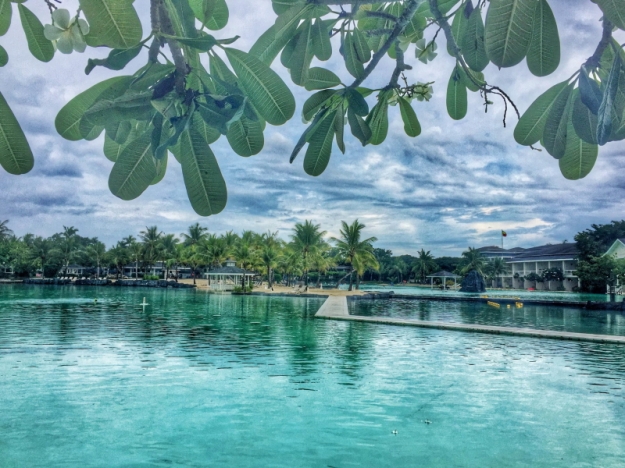 All photos taken at Plantation Bay Resort and Spa using an iPhone 6.

After our tour of Iloilo, we decided to have dinner at Breakthrough Restaurant, which is one of the most famous seafood restaurants in Iloilo. My friend remembered it from her previous visit, sharing that the food was really good.

Ambiance
The place was spacious, but was thankfully not full when we arrived.

It’s known for their seafood and patrons have the option to have live seafood like crabs and fishes cooked according to what they want. This was a treat from my friend so she was the one who ordered for us.

While waiting for our food, I decided to check out the place. The restaurant is by the beach.  I felt lucky that we were able to dine here right when the sun was about to set so we had prime spot for sunset-viewing.

Note the island over the horizon, which is Guimaras Island, our destination the following day.

Food
First to be served were the scallops, the main photo of this post. I loved it. It was fresh, buttery and garlicky, just the way I liked it.

We had grilled oysters too. In our dialect, we call it Talaba. Sadly, it wasn’t as fleshy and tasty as the ones we would prepare at home. 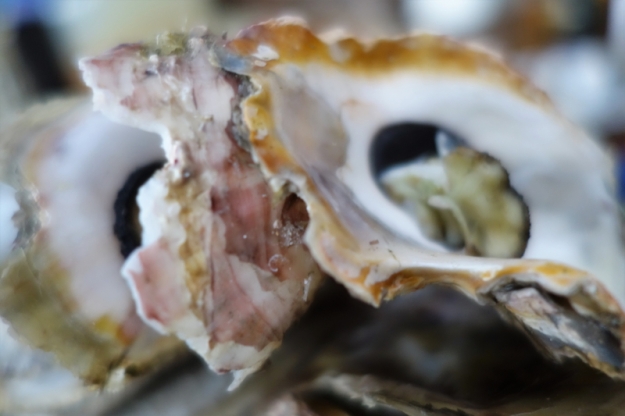 Pardon the photo quality.  We were already so hungry so I just snapped all these photos in a hurry.

We had fish sinigang too. I loved it. It wasn’t too sour, the fish was fresh and the vegetables weren’t overcooked.

While their lechon was good, it wasn’t as tasty as the ones here in Cebu or in Aklan. It was mostly fat too.  But the skin was really good, very crunchy and cooked just right.

And here’s my ultimate favorite: crab, which was so huuuge it filled the whole plate, fleshy, and really yummy.  Just look at that aligue! 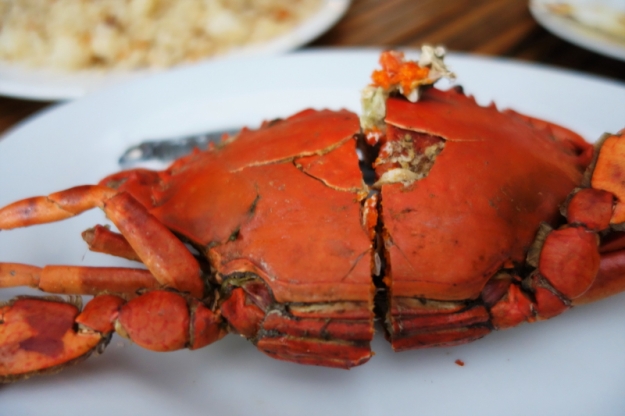 Breakthrough Restaurant’s Aligue (Crab Fat) Rice is also a must. It was very delicious. Unlike in many restaurants, the sprinkling of crab fat on their Rice Aligue was very generous.

I don’t know what this is called, but it’s quite a treat. It tasted like salted dried fish, but it wasn’t as salty.

It was one very good meal. I even told my friend it was my best meal in months!

Service
While the food is good, service is slow considering that there were very few diners. The staff were also not very attentive. We had to keep waving our hands to ask for water, condiments, and whatnot.

Today I got sidetracked from jogging/brisk walking around Plantation Bay by this view.

It was low tide. Normally, I don’t like being by the beach during low tide, but when it is sunrise, I appreciate it since the craggy seafloor makes the shot more interesting.

After taking the above shot, I resumed my exercise only to again get sidetracked after one round of jogging because of this other lovely view. 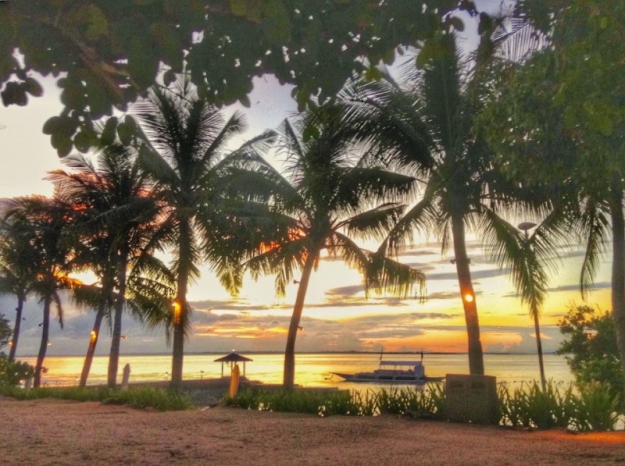 The skyline just looked so pretty, don’t you think? And I loved how the trees made the look more tropical.

When I approached the beachfront, it was still low tide, but water was starting to get closer to the shore. 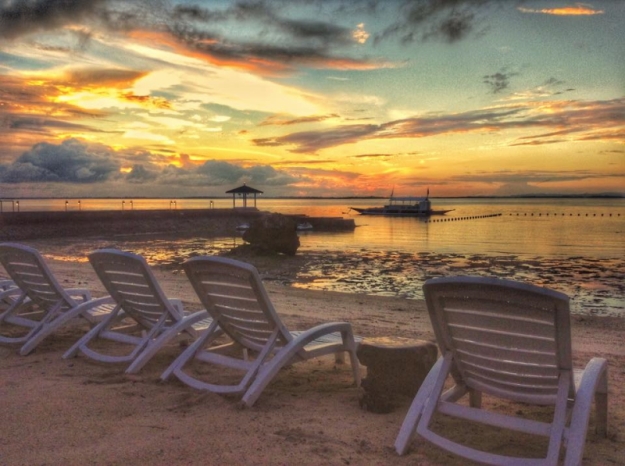 Oh, what I’d give to just spend my day in one of these loungers, reading a book while listening to the crashing waves…

But I had to earn a living so I stopped my morning reverie, took this parting shot and resumed my morning exercise so I could prepare for work.

Pardon the discernible noise in these photos. As mentioned, I was out jogging so I only had my iPod with me to take these shots. Editing courtesy of Snapseed. 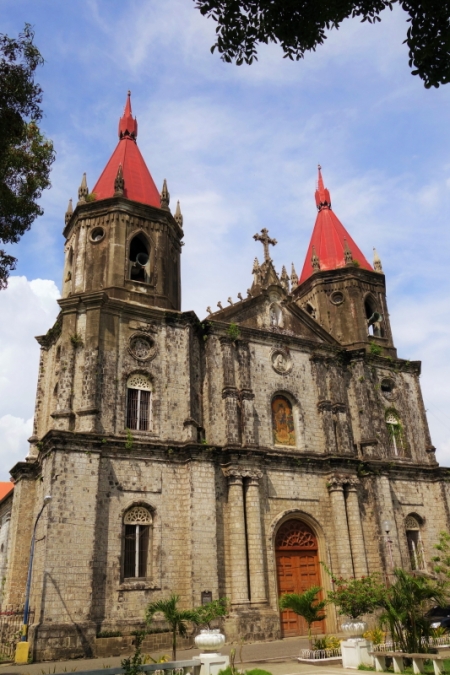 Iloilo is one province that will always be close to my heart because I associate it with moments with mom.  Aklan doesn’t have a mall or fastfood so whenever mommy had to come to Iloilo, I would volunteer to accompany her.  I had fond memories of us shopping together and dining in Jollibee or McDonald’s (this was a really big treat for a promdi kid back then).  And during the long 5-hour bus ride (roads have since improved and travel time is now down to 3-4 hours), Mommy would let me rest my head on her lap so I could sleep (as a teen, I moved on to using her shoulder as my pillow).  I liked to think that she cured my biyahilo too with our trips to Iloilo.

Last year, I decided to finally tour Iloilo.  While I have gone here many times, I only got to tour Iloilo once in college when our class decided to discover Region 6, Western Visayas (we visited Capiz, Iloilo, Bacolod, and Boracay).

During this visit, we stayed at the house of my friend’s friend, which is just walking distance from Jaro Cathedral.  This cathedral is also known as the National Shrine of our Lady of the Candles.

Originally built by Mariano Cuartero, the first Bishop of Jaro, in 1874, this was destroyed by an earthquake in January 1948 and repaired in 1956.  Jaro Cathedral also holds the distinction as the only church in the Philippines whose Marian image of our Lady of the Candles was canonically crowned by the late John Paul II.

Here’s how the inside of the church looks like. 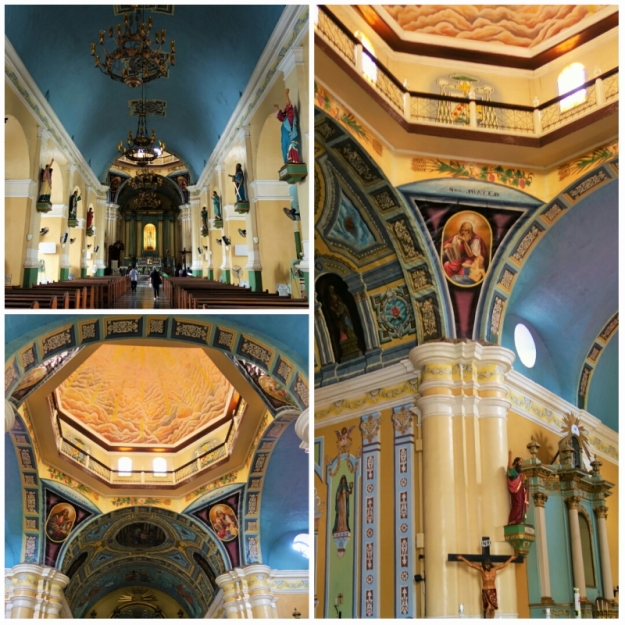 On the columns are all-male saints, with the exception of the Marian image located at the center.

Another interesting feature of this cathedral is its bell tower, which is located across the street (most other Philippine churches have their bell tower on the church itself, or beside it). 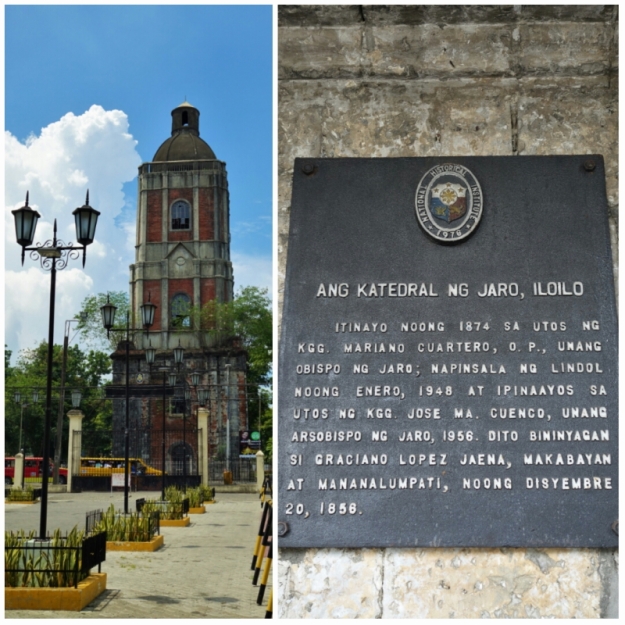 The above was a zoomed-in shot of its main building.  Isn’t it impressive, what with its ornate details?

Lopez Heritage House/Nelly’s Gardens
Now this is one house that is not just stunning, but magnificently restored.  We were told one cannot visit this place without prior arrangements, but because my friend’s friend knows the owner, we were allowed entry. Yey. 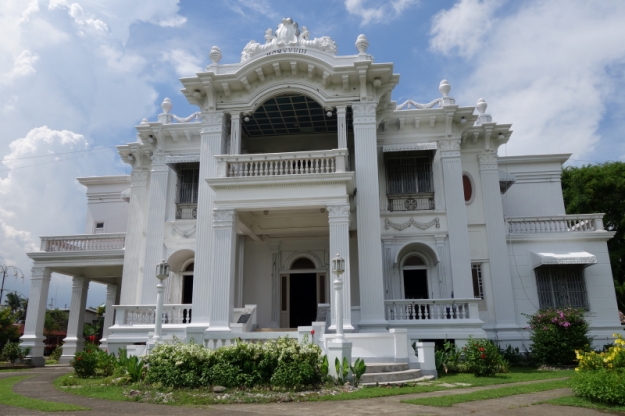 The house is also called Nelly’s Garden, after the eldest daughter of the owners, Don Vicente Lopez and Dona Elena Hofilena. It was built in 1928 and considered the Queen of Heritage Houses in Iloilo.  In 2004, the National Historical Institute declared it a National Historical Landmark. 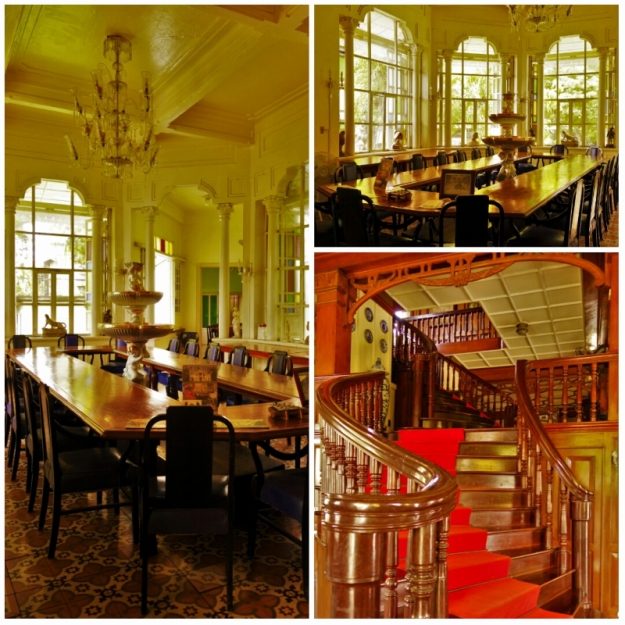 She said that aside from the facade, the house is known for its elaborate dining rooms and one can easily see why.  The staircase looks lovely too, and while she was willing to tour us around longer, we were pressed for time so we did not linger.

Parish of St. Anne/Molo Church
Some consider this the feminists’ church because all the statues in the church are female.  The church’s design is Gothic. 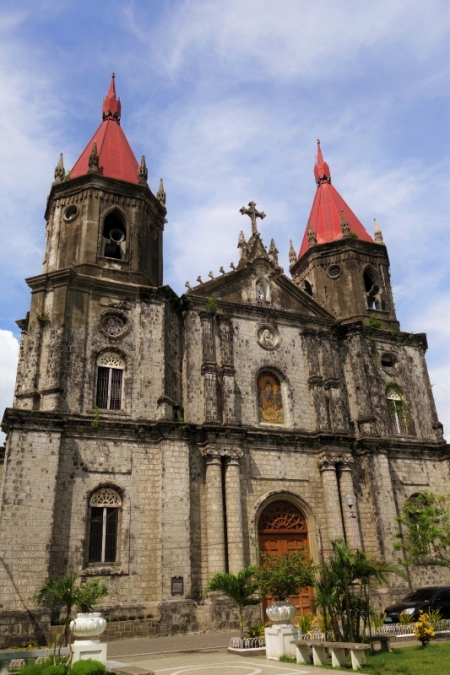 Built in 1831 and completed in 1888, this is the only Gothic Church in the Philippines that is outside of Manila.  It is considered one of the most beautiful churches in the country, and I can see why.  Personally, it reminds me of Saigon Church in Vietnam.

Here’s how it looks like inside.  It looks like there were recent refurbishments so everything looks well-maintained.

A UNESCO World Heritage Site since 1993, this Baroque Spanish-era church is also called Miag-o Fortress Church because it serves as a defensive tower of the town against Muslim raiders.

According to Wikipedia, its color is due to the materials used in its construction.  These include adobe, eggs, coral, and limestone.

What I loved about this church is its facade.  The bas-relief is a mixed influence of Medieval Spanish, Chinese, Muslim, and local traditions and elements.

I loved the details that went to each part of the church too, like the windows and the carvings on the wooden door.  And yes, the very detailed bas-relief, though I noticed that parts of it were crumbling (see lower left photo).

Here’s an inside look:

They said the altar is the original altar from the 1700’s that was deemed lost during a fire in 1910, but recovered during repair excavations in 1982.

Here’s my parting shot of the church.

San Joaquin Church
Built in 1969, this church is known for its facade with a cultural relief depicting Spanish victory over Moroccan forces in the Battle of Tetuan.

The church was undergoing renovation during our visit, so I wasn’t able to scrutinize the relief up close.

These photos are of the side portion of the church.  We thought we could get in, but it was closed so we just snapped photos and headed back to Iloilo City.

On our way back, we passed by the private beach of our host.  It had black sand, but very close to the beach (its backyard is literally the beach).  I don’t remember the exact location, but we made a quick stopover here to watch the sunset.

The sky was already turning light yellow when we arrived. 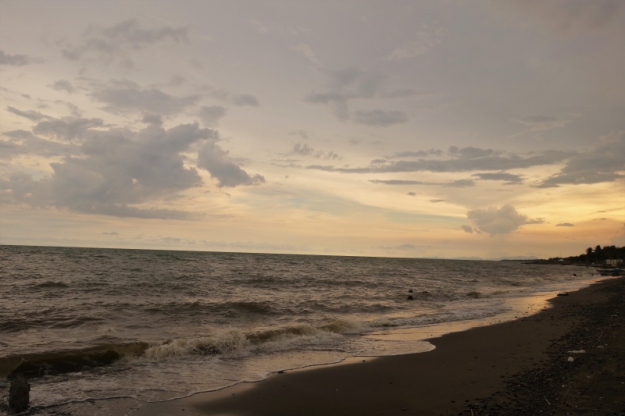 And when the sun finally came down into the horizon, the skyline became orange-yellow. 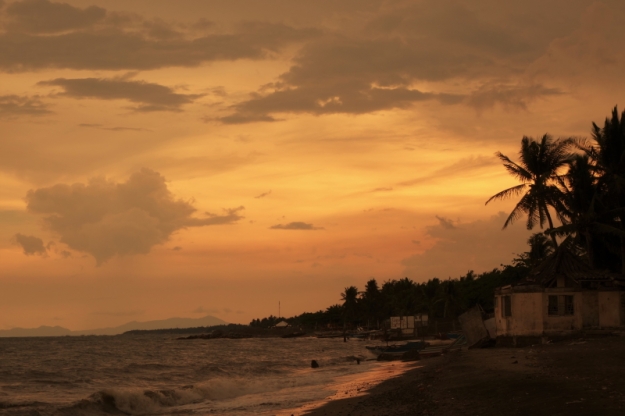 Isn’t it so pretty?

And thus was how we spent our day in Iloilo before heading to Guimaras the following day.

I again took Brave for a spin and this time, instead of taking our usual route, dared to bike to as far as Cordova, but when I reached Merkado, had to go back because I found it too chaotic.  There were just a lot of trisikads and tricycles who would abruptly stop (my knuckles ached from constantly pressing the brakes) and motorcycle drivers would also appear from seemingly out of nowhere, driving too fast and not giving way.

Halfway back home. I spotted a dirt road that seemed to lead to the beach so I steered my bike to that direction and was greeted with this view.

I could tell the sun was about the set so I opted to wait and whiled away my time by taking photos of my bike and the views. 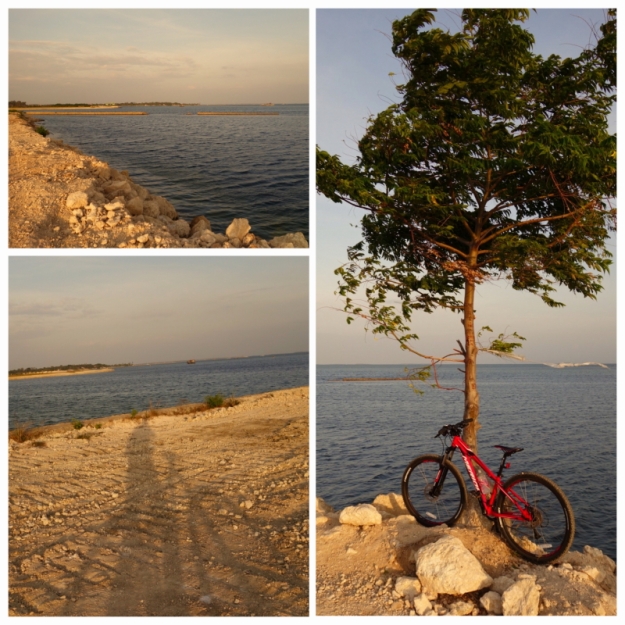 Later, I found out that the sun would set not by the beach, but across it, which actually made the views prettier because it had a backdrop of trees.  It was also where the locals would leave their bancas, so I had more to work on photo-wise.

Did you notice how the clouds looked like a volcano and that the setting sun was right on its mouth/center?

Here’s a collage of my sunset views on this sweet spot: my early view of the beachfront, the pale sky that suddenly turned a darker shade of orange, a close-up of the volcano cloud, of the rounded sun over the coconut trees, and of the coconut trees against a sea of yellow-orange.

Here’s my favorite photo from this set, because it just looked so tranquil. 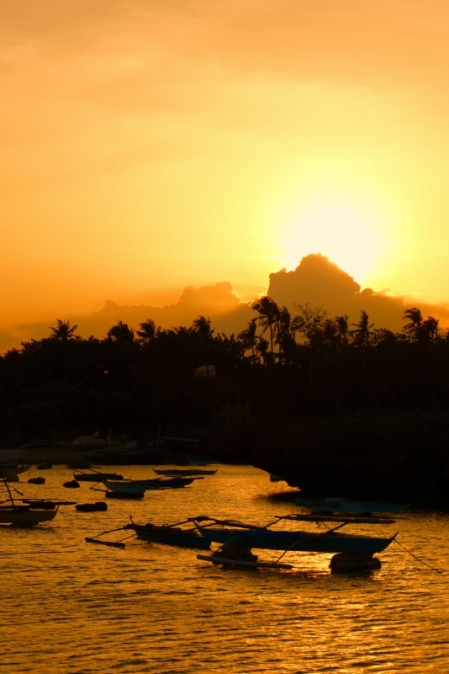 Here are the rest of my photos, which were taken right at the end of my visit to this place, which by the way remains unidentified since Google maps weren’t particularly helpful.

I think this is one of the perks of biking: it brings me places, even to nook and crannies that are unknown to most.

Brave and I will be back to this spot, for sure.