My apologies, since it’s been almost two months since my last post and that’s because I went to the US for a month-long business and leisure trip.

Here’s what kept me occupied while I was away.

Cornell University
If you remember this post, you’ll remember how torn I was about taking my company’s offer of management training at Cornell’s School of Hospitality Management. I realized it was too good an offer to pass up so in late June, I revisited Cornell to study Strategic Leadership and New Media for Hospitality. 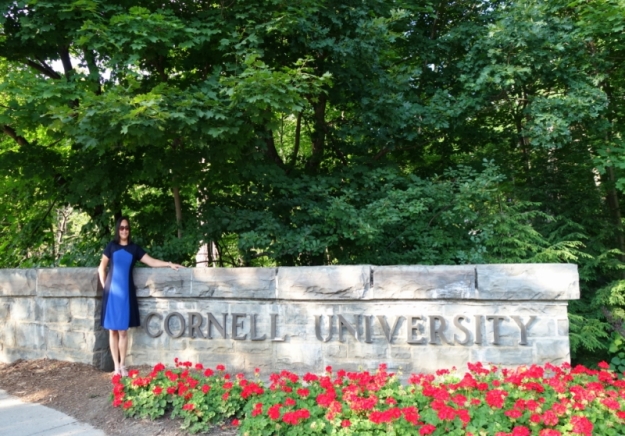 the customary photo-op at the university’s entrance

In between classes, I took the time to rediscover Cornell.  Here’s a photo of Triphammer Falls, perhaps the campus’ most popular falls, with a 55-feet multiple cascading falls.

Ever the flower lover, I fell in love with the university’s Botanical Gardens.  Here’s one of my favorite photos from there.

Isn’t it amazing?  Someone noticed me photographing flowers at odd angles and asked me what I was doing.  When I showed her some of my photos, she was amazed and later joined me in shooting flowers with the camera lens pointed at the sky.

Niagara Falls
The school organized this trip.  I missed this the last time since they offer this only once during the 4-week summer class.

Despite the cloudy and at some points rainy weather, I found Niagara amazing, though many shared that the best views of the falls are seen from Canada.  Hmm.  Someday.  🙂

Buttermilk Falls
The Falls takes its name from the foaming cascade formed by Buttermilk Creek as it flows down the steep valley side toward Cayuga Lake.

It’s been raining during our last week in Ithaca, so the water at the falls was a little murky.

Washington DC
This was my first time in the country’s capital.  I had fun discovering the various attractions along the National Mall (my favorite would be the Smithsonian Castle).

by the Lincoln Memorial Reflecting Pool, with the Washington Monument behind me

Too bad the United States Capitol was under renovation during our visit.

renovation is underway for the United States Capitol Dome

Just look at all those black cars and men in tuxedos.  No wonder being here made me feel as if I were transported to the pages of James Patterson’s Alex Cross novels, or to the shoot of popular TV shows 24 and Bones.

Reston, Virginia
We stayed here for 3 nights.  While our friend took classes at the Learning Tree, another friend and I had a gastronomic feast at the establishments along Reston Town Center.

We really didn’t explore Reston much since we opted to revisit Washington DC while here.

One of our friends lives in Falmouth so we stayed with her while in this state.  We visited Craigville Beach, Cape Cod, and  Martha’s Vineyard.

Las Vegas
Technically, we only slept here for 2 nights in preparation for our camping trip in Utah and Arizona.  We stayed at Stratosphere because it was our pick up and drop off points.  We did have the first night to stroll along the strip and again, we took the time to see Bellagio’s beautiful indoor garden (the theme this year was under the sea) and watch its dancing fountain.

Bellagio’s Dancing Waters, with the Las Vegas nightscape as its backdrop

Utah and Arizona
We wanted to see the Grand Canyon and online, found Bindlestiff’s 3-day glamping that includes visits to Zion National Park, Bryce Canyon, Monument Valley, and of course, the Grand Canyon.  While expensive at USD 595, it was worth it.  A trip of a lifetime indeed. 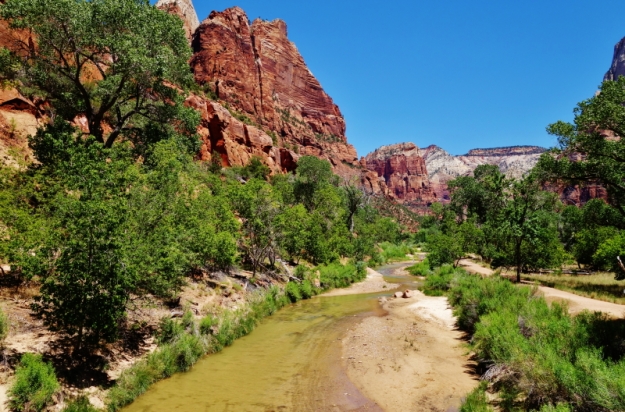 This was our first stop.  Zion is Utah’s oldest national park known for its incredible canyons and spectacular views.

Bryce Canyon
Popular for its hoodoos, Bryce Canyon is actually not a canyon, but a collection of giant natural amphitheaters.  Pictured below is Thor’s Hammer that can be viewed only when one goes down a short hike from the topmost viewdeck.

This is the US’s second largest man-made reservoir by maximum water capacity after Lake Mead.

Hoover Dam
Constructed between 1931 and 1936, Hoover Dam was once known as Boulder Dam and is located on the border between Arizona and Nevada.

This was my favorite part of our trip because I was amazed at the beautiful colors of the walls, which range from light to golden-yellow, and orange to red orange, with the occasional glint of purple here and there.

Monument Valley
Known for its cluster of vast sandstone buttes, Monument Valley became popular after it was featured in many forms of media.

We drove around the valley, which made me appreciate it beyond what I’ve seen on American West-themed movies. 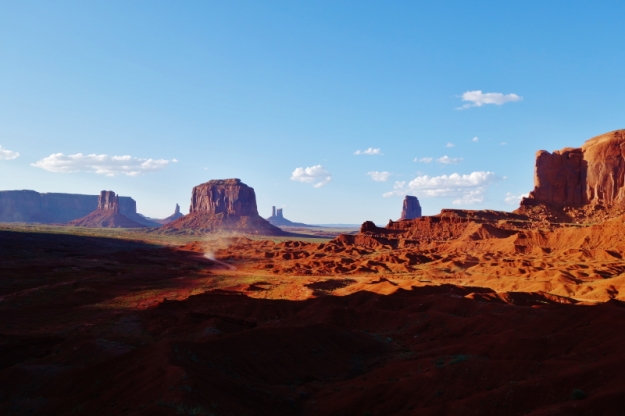 I loved the valley’s vivid red color and the buttes rising above the landscape.

We camped here for the night and the following morning, woke up to this beautiful sunrise. 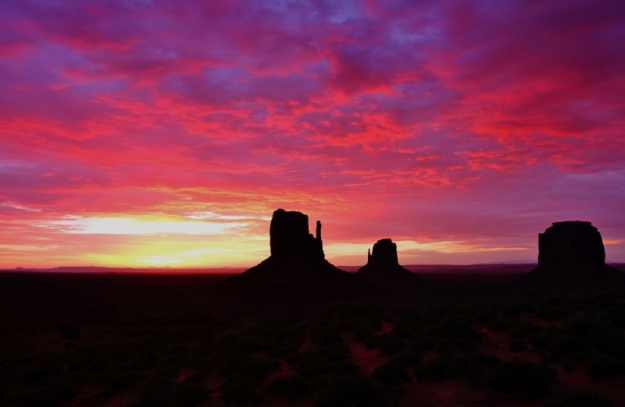 Grand Canyon
Who needs an introduction to the Grand Canyon, one of America’s most iconic natural attractions?

This was the highlight of our trip made more memorable when I signed up for a helicopter tour of the canyons.  The above photo was taken mid-flight and while I got scared whenever the helicopter made sudden turns, the views made everything worth it.

Too bad the weather turned dreary at the end of our helicopter ride and during the remaining hours of our stay there.

Here’s a collage of photos from my visit to Zion National Park, Bryce Canyon, and Monument Valley.

me at Zion National Park, Bryce Canyon, and Grand Canyon

Route 66
On our way back to Las Vegas, we stopped by the historic Route 66.  Introduced to my generation via the Disney movie Cars, Route 66, also known as Will Rogers Highway, became one of the most famous roads in America.  It originally ran from Chicago, IL through Missouri, Kansas, Oklahoma, Texas, New Mexico, and Arizona before ending at Santa Monica, CA. 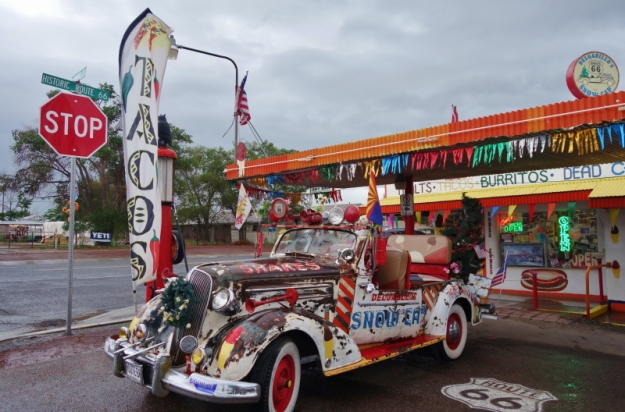 Not only did we stop by here, we also got to dine at Delgadillo’s Snow Caps, a historic eatery and roadside attraction along Route 66.

Disneyland in Anaheim, Los Angeles was celebrating its 60th anniversary this year and we felt lucky to be there.  Highlights of my visit included a ride to the Pirates of the Caribbean and Soarin’, and my Star Tours 3D, motion-simulated flight.   We also stayed until nighttime to experience World of Color.

And thus was how my recent visit to the US went.  More photos on my detailed blog per attraction soon!

Chanced upon this photo while I was working on a scrapbook of my trip to the US last year.

Photo retouched using the Snapseed mobile app, which is now officially my favorite photo editor. With it, getting creative with my photos has never been so easy and fun! 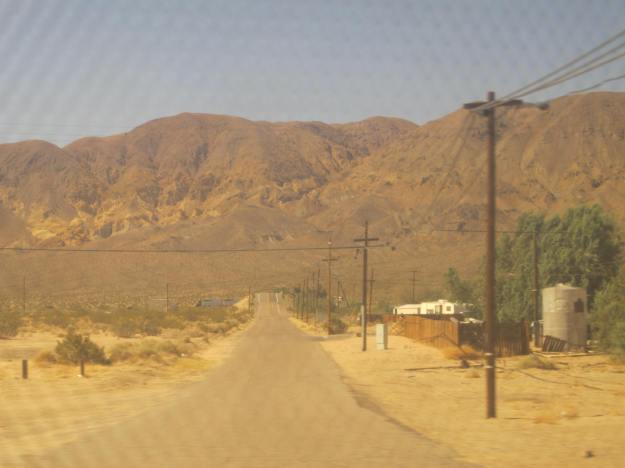 The above photo was taken while I was on a bus en route to Las Vegas.  Having been born in the Philippines, I grew up amidst different bodies of water (our house is near a swamp and river, my grandparents’ house is by the river and another relative’s house is right across the sea).  It was thus new to me to see all these mountainous but mostly bare land.

It was also interesting to see an occasional row of houses like these ones. 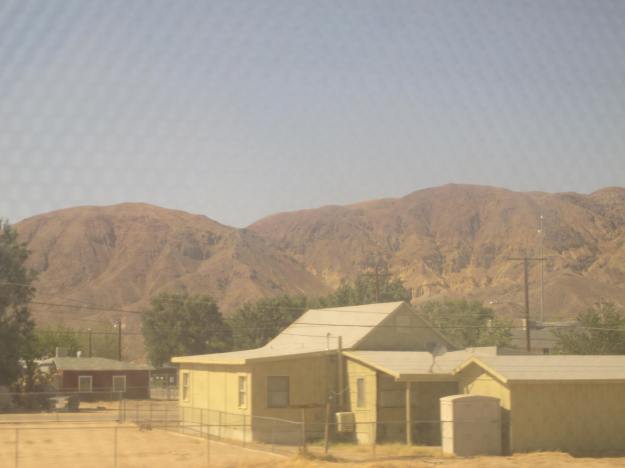 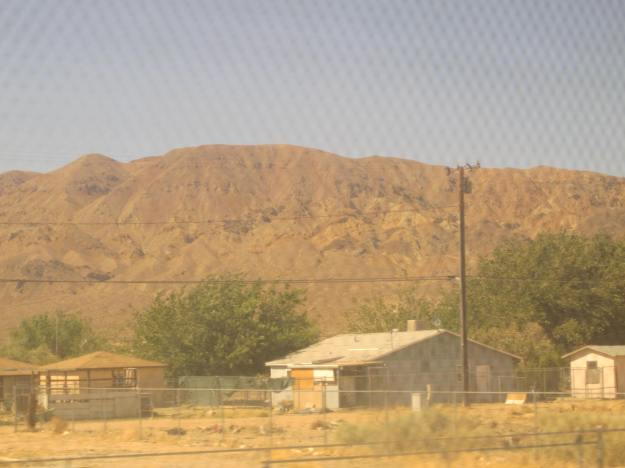 In some Hollywood films and TV shows, I’ve watched scenes featuring drives along wide interstate highways so it was interesting for me to finally drive through such a highway myself. 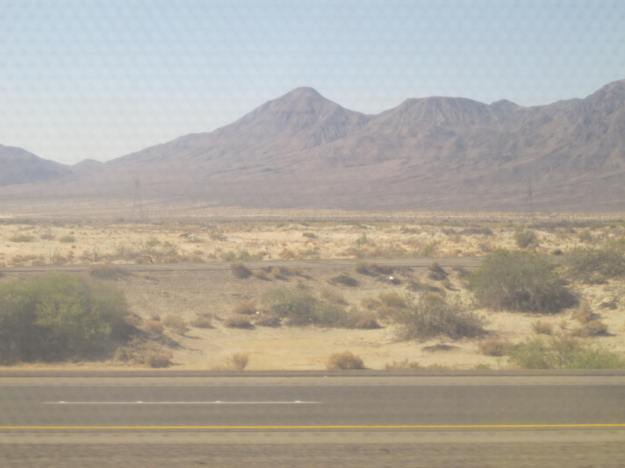 The long drive from Los Angeles to Las Vegas could get boring so I entertained myself by taking photos and counting the cars (I excluded trucks and buses) that passed by while I listened to some music on my iPod.

Pardon the photo quality as my bus window had this immovable dotted black screen that prevented me from taking clear shots that’s why I had to carefully zoom in to make the dots least discernible.

Estimated travel time from Los Angeles to Las Vegas is 7 hours and a one-way American Lion ticket cost us USD 20 per person.