view from the summit

This was my first activity when I visited Camiguin late last year (yeah, I know, this is another late post, but since I juggle an 8-5 job, crafting, traveling, and reading books with blogging, I am always pressed for time).  But I promise I’ll catch up, fingers crossed.

As mentioned in this post, I was here as a solo traveler as to travel alone is one of the items in my wish list.

Camiguin is the Philippines’ second-smallest province.  It is an island province on the northern coast of the Mindanao archipelago known for its waterfalls, volcanoes and natural springs.  It is also dubbed the country’s Lanzones (Lansium parasiticum) capital.  I chose it for my solo travel since I read somewhere that it has almost zero crime rate.

I arrived in Camiguin at about 10 AM.  Since it was still too early to check in, I decided to tour the island first.  My tour guide was Kuya Criz (mobile number +63906 927 2420) who I found through a friend’s blog.  The tour cost me Php 1,250 per day (regular rate is at Php 1,500).  I was given a Php 500 discount since I booked him for 2 days.  Note that in Camiguin, as regulated by the local government, transportation and tour costs are uniform regardless of where you inquired/booked.  This is really convenient since you’re assured that you’re not charged unnecessarily or worse, scammed.

After paying the Php 10 entrance fee, I walked up the walkway, which is the province’s popular pilgrimage site for Roman Catholics, especially during the Holy Week. 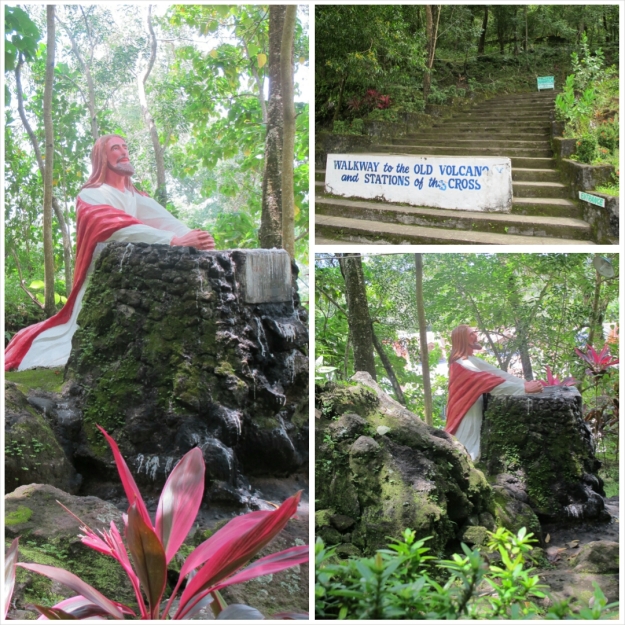 What makes it popular is its life-sized Stations of the Cross though personally, I found the statues poorly done.

Initially, I wanted  to just see a couple of the stations, but the locals, especially the ticket lady,  encouraged me to go all the way up to the summit.  “The view from there is breathtaking,” they assured me.

And so off I went to conquer Camiguin’s 8-kilometer path to reach the old volcano’s peak.

Here’s the view of the walkway and trees from the lower part of the path.  Note that after the 4th station, the walkway is no longer paved, which made the climb more difficult.

Halfway through, I passed some climbers who were on their way down.  By then, I was already a little tired.  “Is the view from the top worth all this trouble?”  I asked.  “We turned back when we reached the 10th station.  It was too hot and tiring!” was their reply.  Uh-oh…

and you say I have to climb all the way to the top?!

Though the trail was beginner-climber-friendly, the scorching heat of the sun was making the climb difficult.  What more, since I did this after leaving the airport where liquid over 100 ml is prohibited, I didn’t have bottled water.  Sheez!

I was about to turn back when the views shifted.  There were more trees so there was shade.  And I could already see the beach, and this spurred me into continuing my climb.

There were interesting flora (and even fauna) too and taking their photos granted me some respite from my punishing hike.

I don’t know what these purple flowers are called, but I’ve been seeing them in Agcawilan since I was a child.  I also saw them in my trips to Siquijor, in Osmeña Peak, and most recently, in Guimaras.  By the way, did you notice the white spider in one of its petals?

As I climbed, the view was getting prettier, and I took a liking to photographing cogon  grasses (Imperata cylindrica).  I thought cogon-fringed shots made the views more interesting.

Aaand, finally, I reached the old volcano’s summit.   Oh, before I forget, here’s a photo of all 14 stations of the cross. 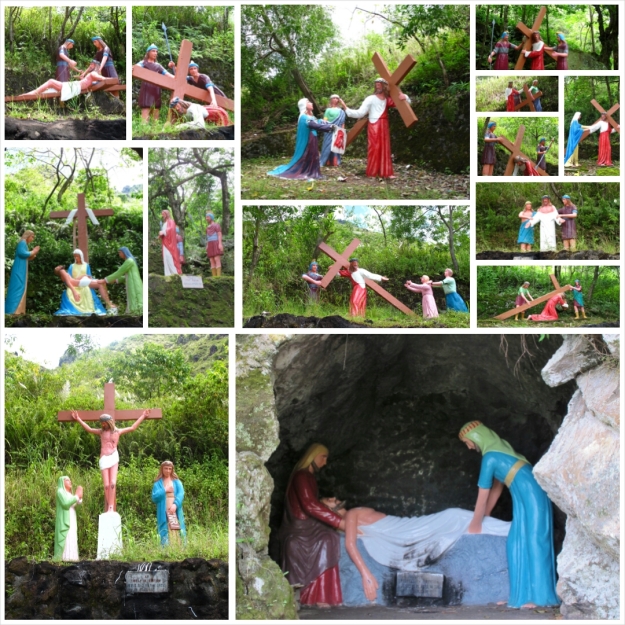 Pardon me if it’s not chronological.  I wanted to arrange it, but it’s difficult to do so because of PhotoGrid’s layout (some grids are too small for the corresponding station so I just placed the photos where they fit).

At the summit was a statue of the risen Christ.  As there was a group of nuns praying, I did not intrude on their moment and opted to take photos of the views.

The giant cross marks what is perhaps the province’s most popular attraction: the Sunken Cemetery.  History-wise, it was said that during the volcanic birth of Mt. Vulcan from 1871 to about 1875, some areas in the town of Bonbon subsided.  This caused the town’s cemetery to sink.  To memorialize the departed, in 1982, a giant cross was erected on the spot where the cemetery sank. Here’s a collage of more photos of it as taken from varying vantage points. 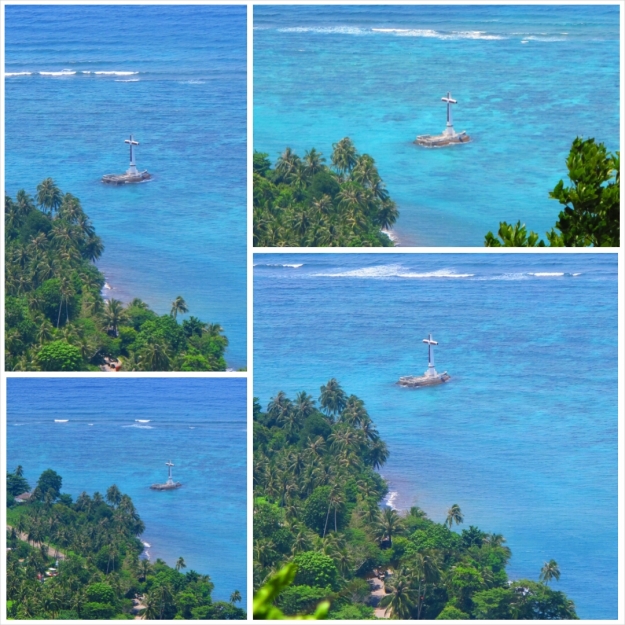 The locals were right.  The views from the top of the old volcano were beautiful!  Seeing them was definitely worth being baked by the sun during the one-hour, eight-kilometer hike.

Lastly, here’s one of my favorite photos from this set:

How wondrous it is to conquer an old volcano’s peak and look over the sea’s calming hues of blue while watching the clouds scurry by.

© Posts and photos by Milai unless otherwise specified. Feel free to share, but please give credit where credit is due by linking back to my blog.
Follow Thoughts, Tales, and Whatnot on WordPress.com