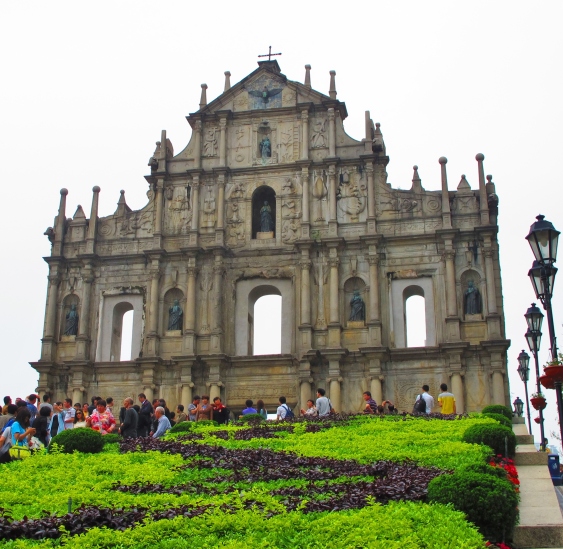 From the Royal Hotel, we walked along a colorful cobblestone street and took in this scenery to get to the famous Ruins of St. Paul’s. 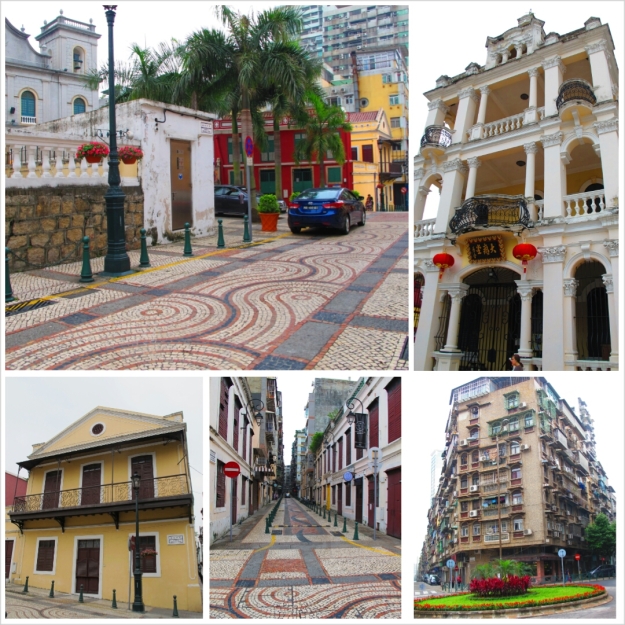 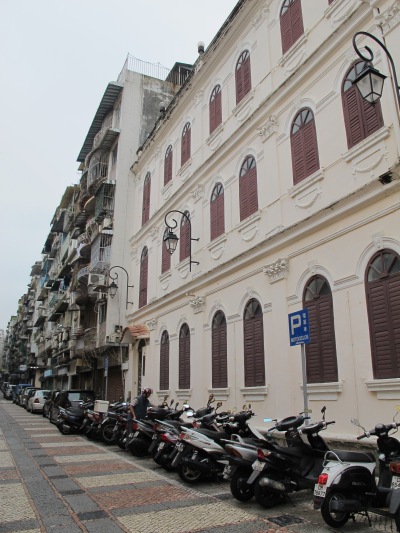 Ruins of St. Paul’s
When we arrived at the cathedral, I was very surprised to see a lot of people. And I mean A LOT – like busloads of mostly Chinese tourists who even had colored flags or caps to distinguish themselves among each other. It was thus very difficult to get good photos because there were just too many photo-bombers. 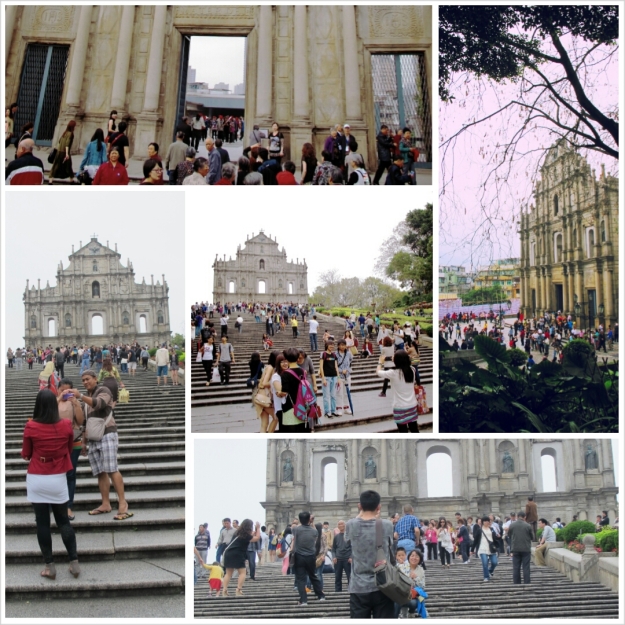 The Ruins of Saint Paul’s refers to the ruins of a 16th-century complex in Macau including what was originally St. Paul’s College and the Cathedral of St. Paul, which at the time was one of the largest Catholic churches in Asia. It was built by the Jesuits from 1582 to 1602, and is now a UNESCO World Heritage Site. 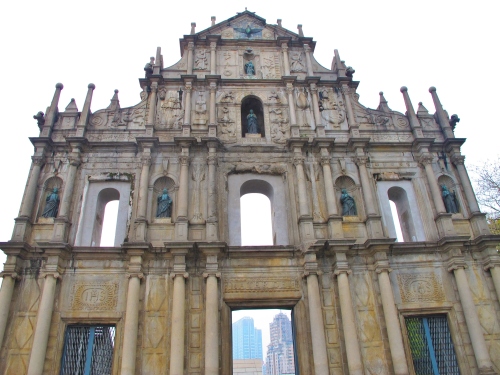 Behind the Ruins is the Museum of Sacred Art and Crypt that houses relics and artifacts from the Jesuits who built the complex. 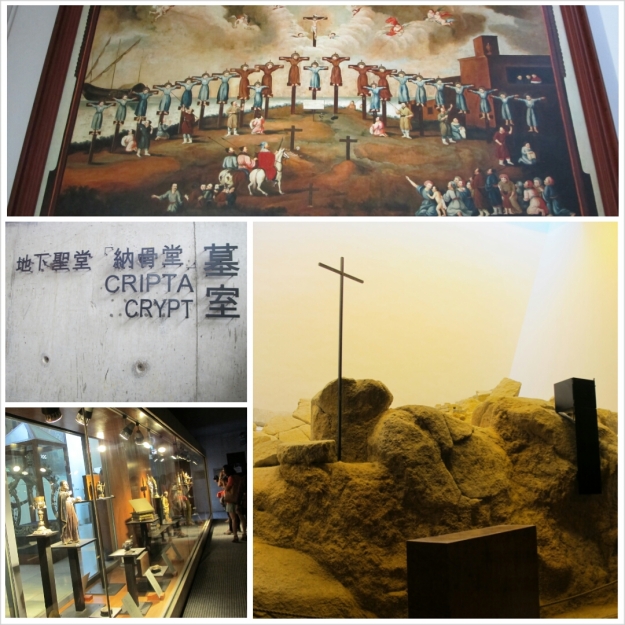 Museu de Macau
On our way to the museum, I found a spot that offered a wonderful vista of the ruins. This is one of my favorites in this set: 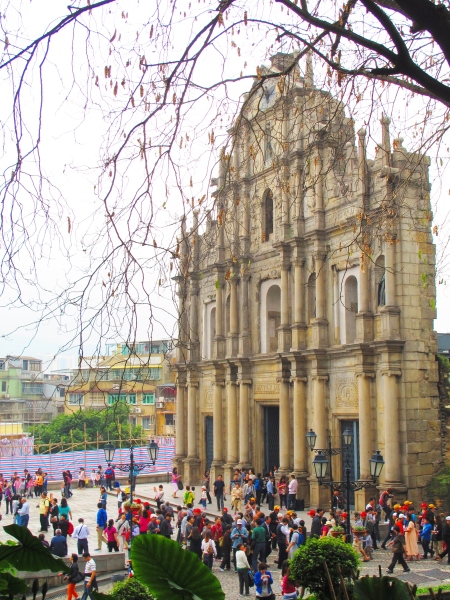 Museu de Macau required an entrance fee, but we’re not really into museums so we were content with just looking at some Sun Yan-Sen memorabilia outside the main museum. There was a pile of rocks too described as belonging to the first phase of construction around the original St. Paul’s College. 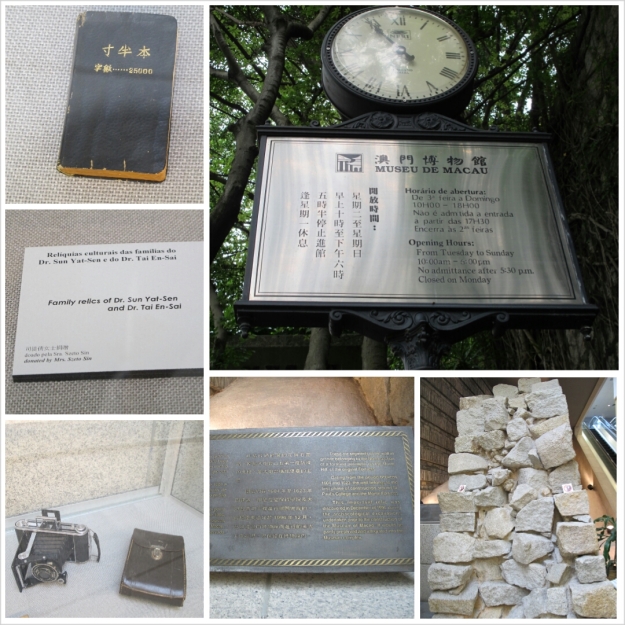 Jardim Da Fortalleza
At the top level of the museum is the Jardim da Fortalleza, which has limited flora. 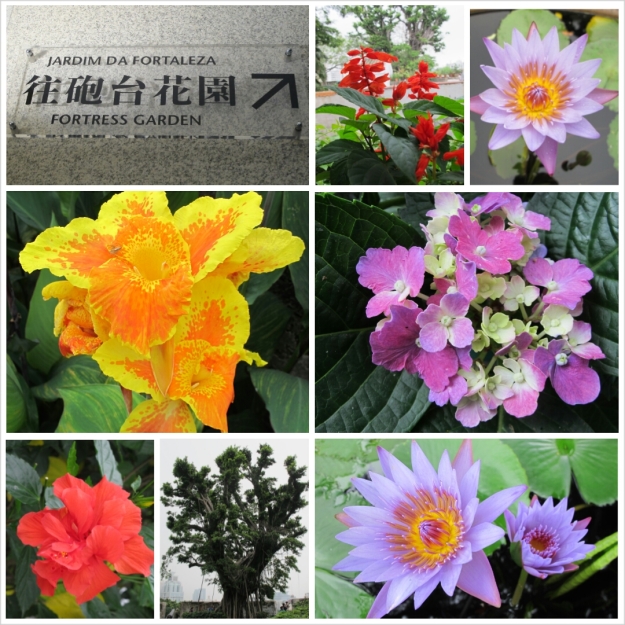 I don’t know what these flowers are called, but they are my favorite in this set: 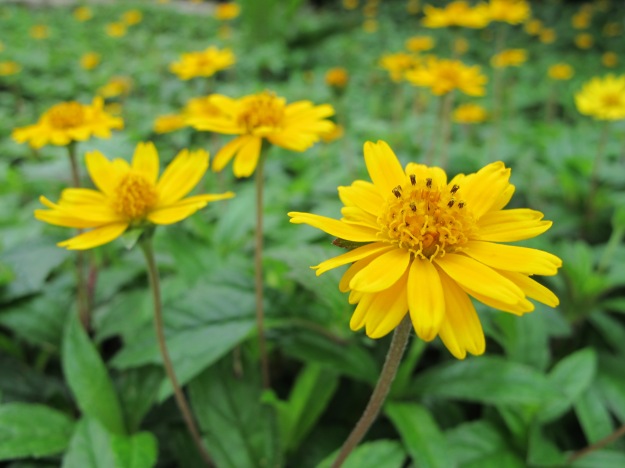 Aside from these, the garden also provided us with views of Macau’s skyline: 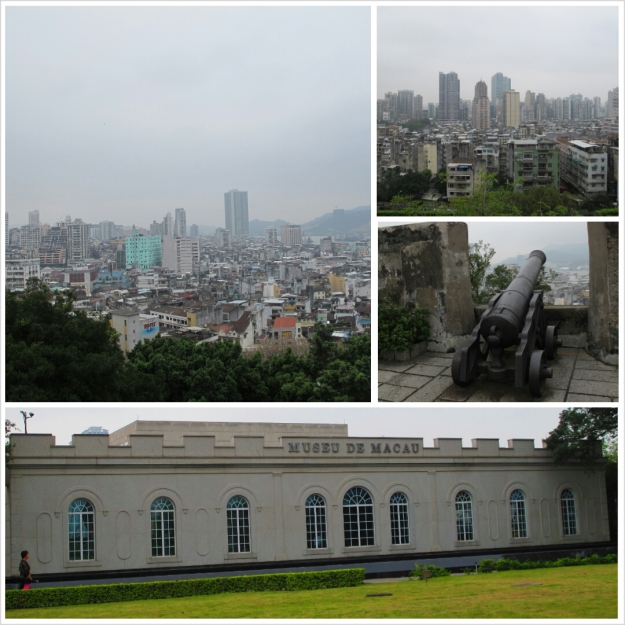 Afterwards, we headed back to the ruins.

At the bottom step is a signage about Macau and a pedicab photo spot. 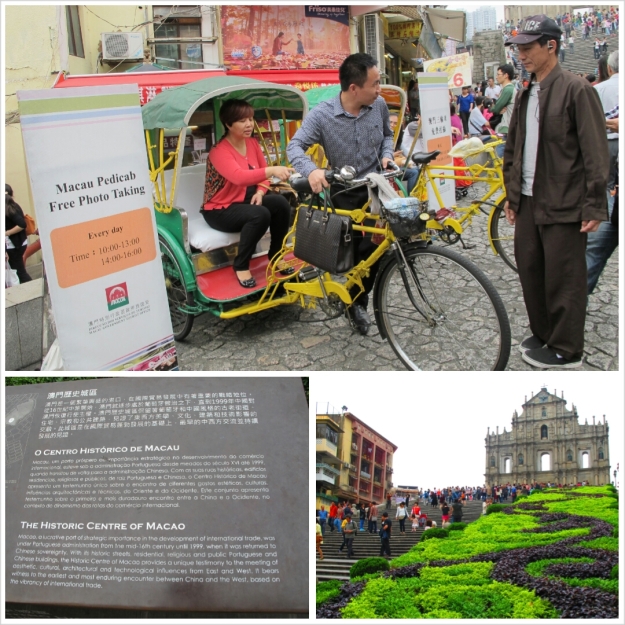 And on the opposite road were shops selling delicacies and Macau’s famous jerky with flavors ranging from the simple Whole Pork of Fillet to Spicy Beef and Barbecue Neck Pork (huh?!) 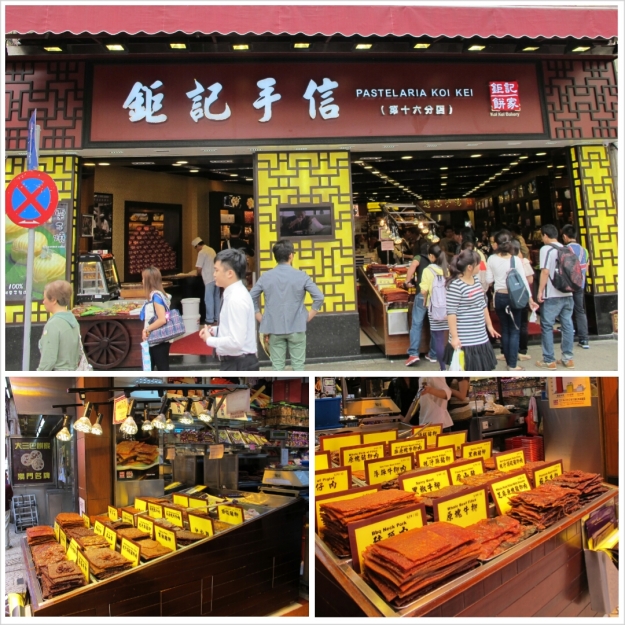 To those planning a visit here, know that these shops offer free food taste.  My friend and I initially planned to dine in a proper restaurant, but got full from savoring Pastelaria Koi Kei’s delicacies.

Aside from the jerky, Macau is most famous for their Portuguese Egg Tart. 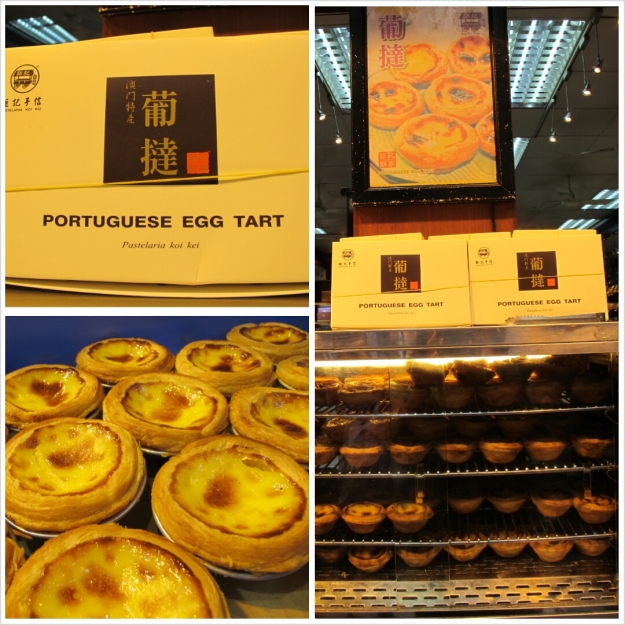 Though somewhat full, we couldn’t resist buying one each. And it was indeed so good and worth all the talk – not too sweet, with flaky pastry and yummy custard filling.

Afterwards, it was time to check nearby points of interest but on the way there, I was again amazed at how crowded the narrow streets were.

St. Dominic’s Church
After getting my foot stepped on and myself bumped into a couple of times, we finally got to St. Dominic’s Church, which was founded in 1587 by three Spanish Dominica priests. The first Portuguese newspaper on Chinese soil, A Abelha da China (The China Bee) was published here on September 12, 1822. 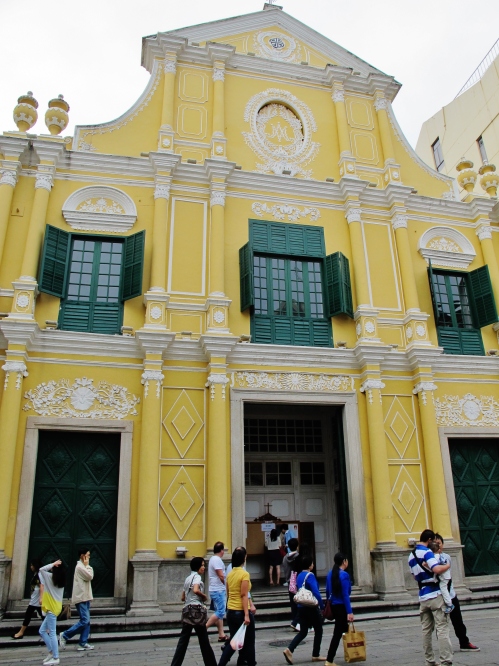 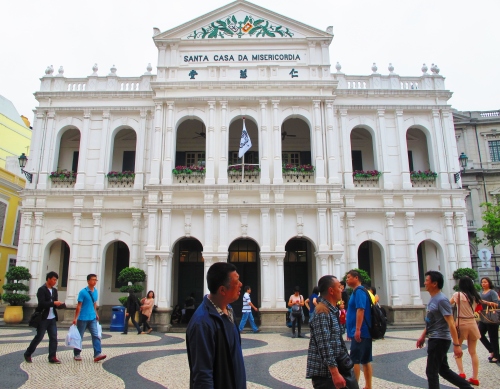 This was established by the first Bishop of Macau in 1569 after one of the most prominent charitable organizations in Portugal. Holy House of Mercy is also responsible for founding in Macau the first western-style medical clinic and other social welfare structures that still function to this day. 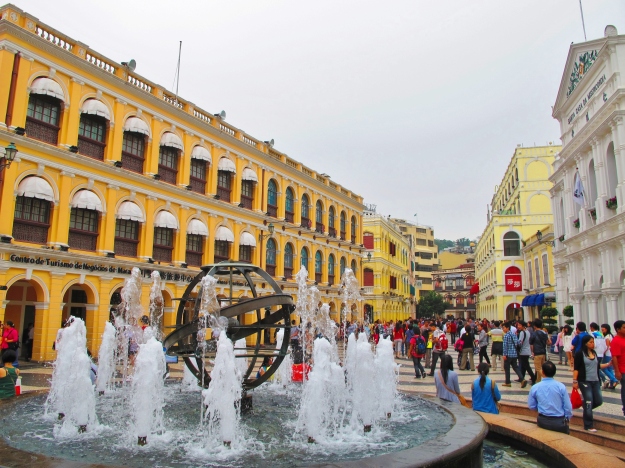 Senado Square has been Macau’s urban center for centuries. It is surrounded by pastel-colored neo-classical buildings that lend the place a Mediterranean vibe. 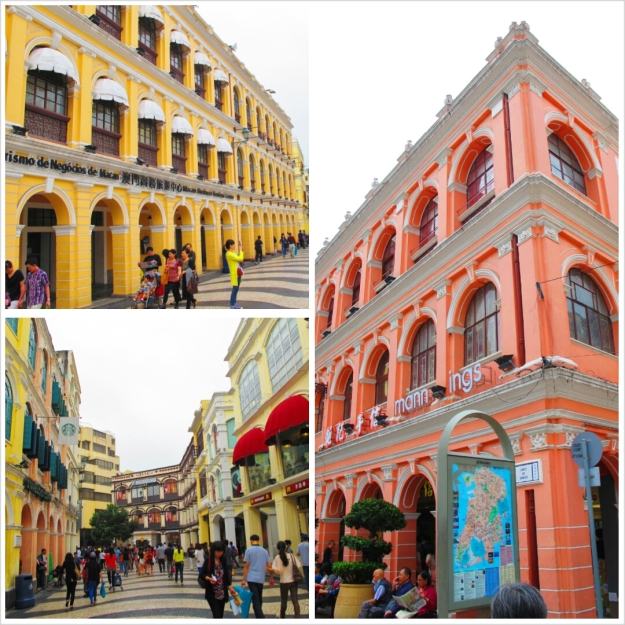 And yes, it was crowded too. 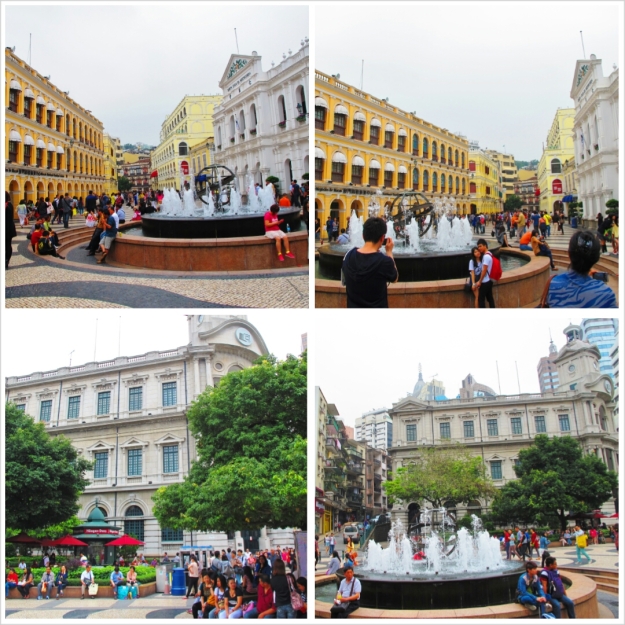 Honestly, I was disappointed with the last 3 parts of this travel. I’ve seen better buildings elsewhere, and they were just too crowded with people it was difficult to appreciate them.

Before leaving the square, I took this shot of their Post Office. 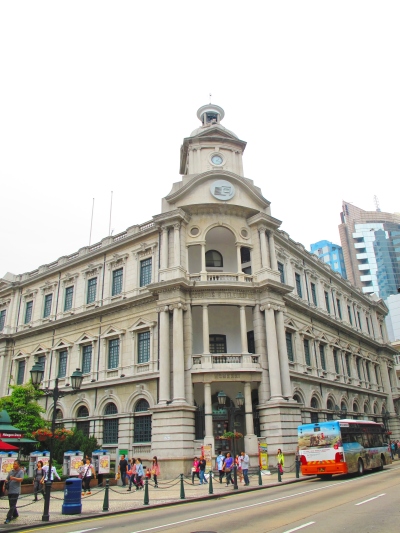 Late Lunch at A Lorcha
Aside from the free food tasting, this was the best part of our Day 2 in Macau. It requires a separate post, though.

Museu Maritimo
We passed by this on our way to our next stop: 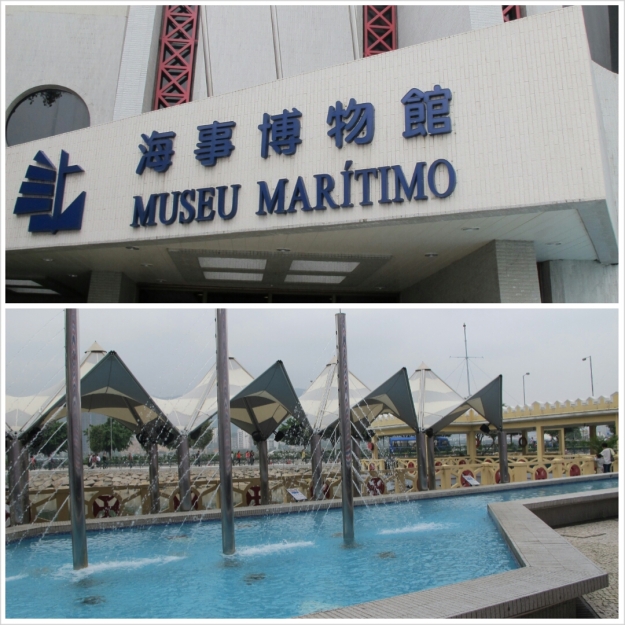 A-ma Temple
A-Ma Temple was just beside A Lorcha, right after the Museu Maritimo. 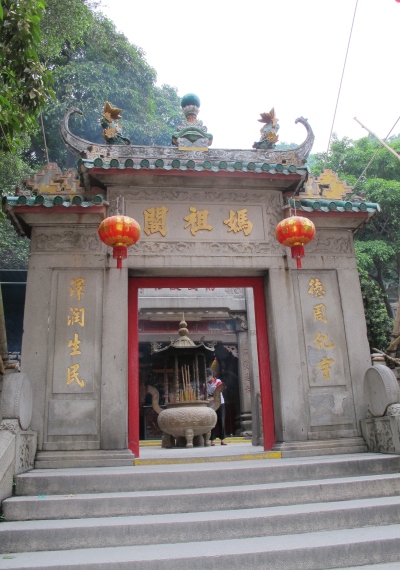 Its signage says that A-Ma Temple already existed before the city of Macau came into being, and that A-Ma is also known as Tin Hou (Heavenly Empress) and is the Goddess of  Seafarers. 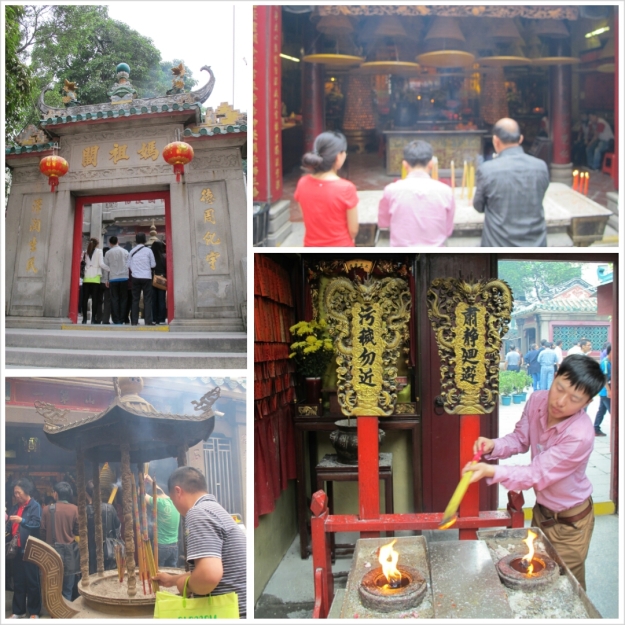 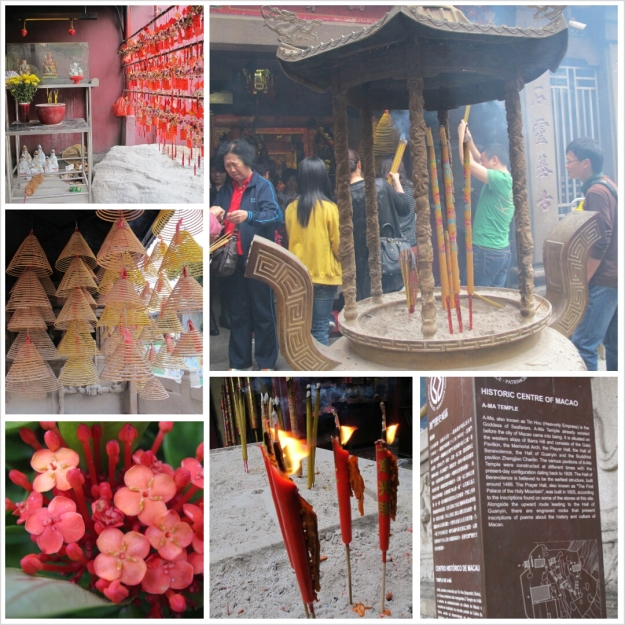 This last set of photos was taken on the bus that would take us back to Macau pier for our ferry ride to Hong Kong. 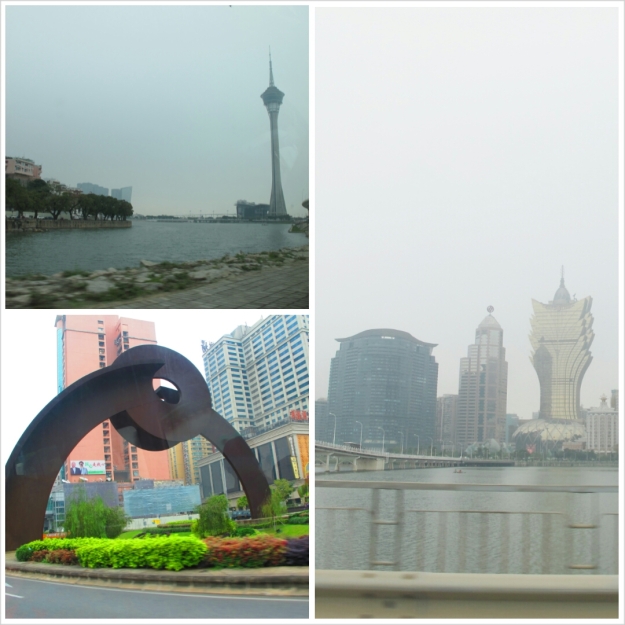