My friend and I dedicated day 2 of our Hong Kong trip to discovering Ngong Ping 360, which is home to the Po Lin Monastery and the Tian Tan Buddha.

We arrived at the Tung Chung Cable Car Terminal at around 10 AM and were so surprised to see a long queue of people lining up to get tickets for Ngong Ping.  It was soooo long a line that my friend and I thought of just taking the bus, but the almost 2-hour travel time set us back.  And so we waited in line for almost 2 hours.  Yeah, I know.  The wait is as long as the travel time, but we opted for this since we get dizzy on long bus rides.

A.V. and I just spent our time chatting and laughing, and people-watching, with me occasionally taking photos of anything that interested me during the long wait. 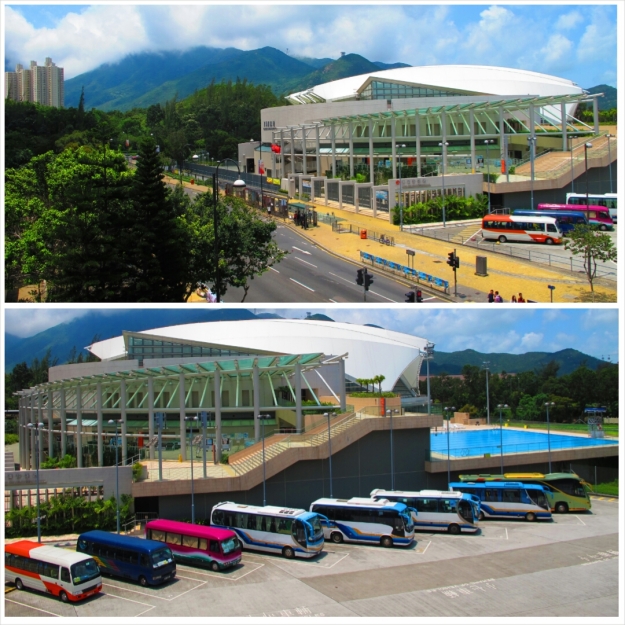 Aaaand finally, we were able to board the cable car that will take us to Lantau Island. 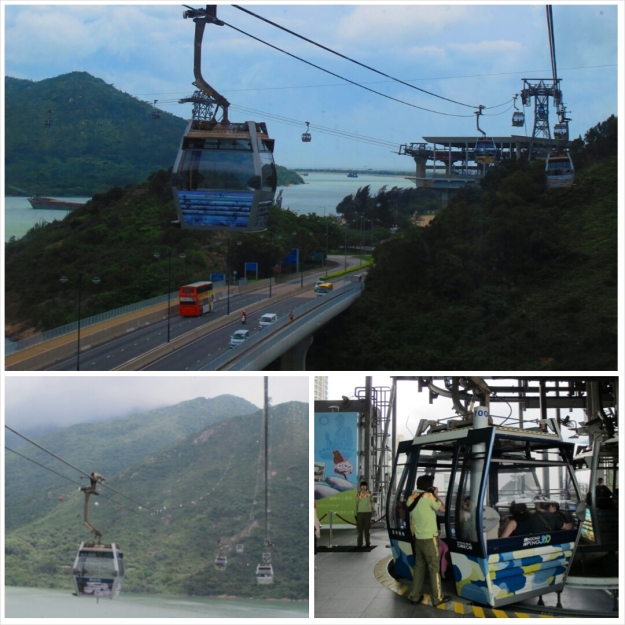 Onboard, we had vistas of the Hong Kong International Airport, the South China sea and the  mountainous terrain of Lantau Island. 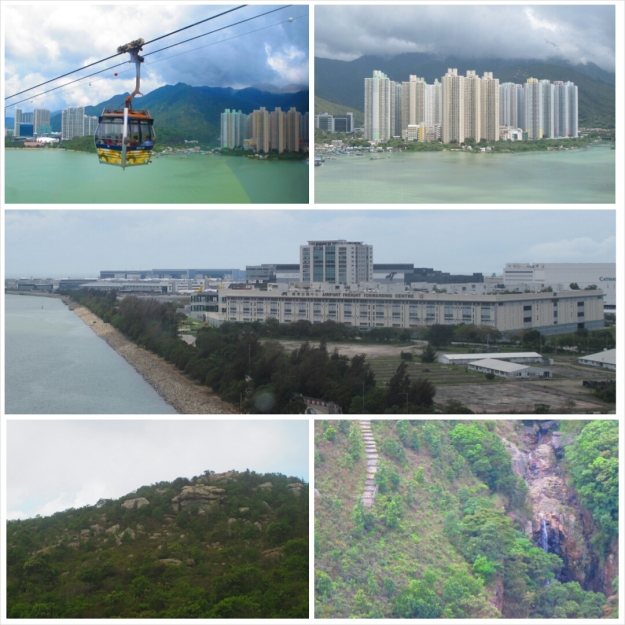 Unfortunately, midway through our flight, the weather took a turn for the worse and for our own safety, they stopped the cable car’s operations which meant we got stuck mid-air for about 15 minutes. 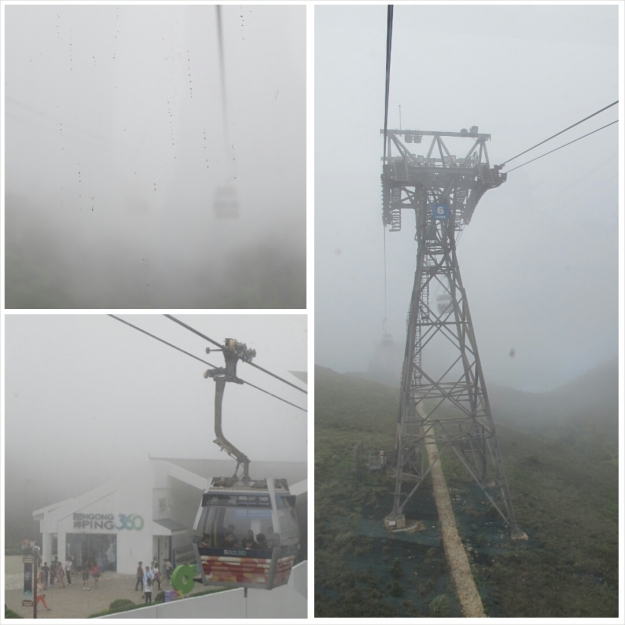 The wind was so strong that we could hear its whooshing sound.  It was really scary being up there while the strong wind rattled the cable car sideways and we were rendered helpless, stuck within the confines of the cable car.

When the weather improved, the cable car resumed its operation and after about 15 minutes, we arrived in Ngong Ping Village.

Honestly, I was expecting a somewhat authentic Chinese village thus I was disappointed to discover that Ngong Ping is primarily just a re-creation of what a Chinese village is.  It was also too crowded and the gloomy weather did not help me appreciate the place.

Since we were very hungry from our 2-hour wait plus the long scary ride, we opted to have lunch before exploring the place.  Lunch was at Zen Taiwanese Bistro.  The place was small (as most shops in Ngong Ping are) and only had 3 tables so expect to wait for a table when here.  I ordered Braised Pig’s Sponge Ribs with Rice (HKD 38). 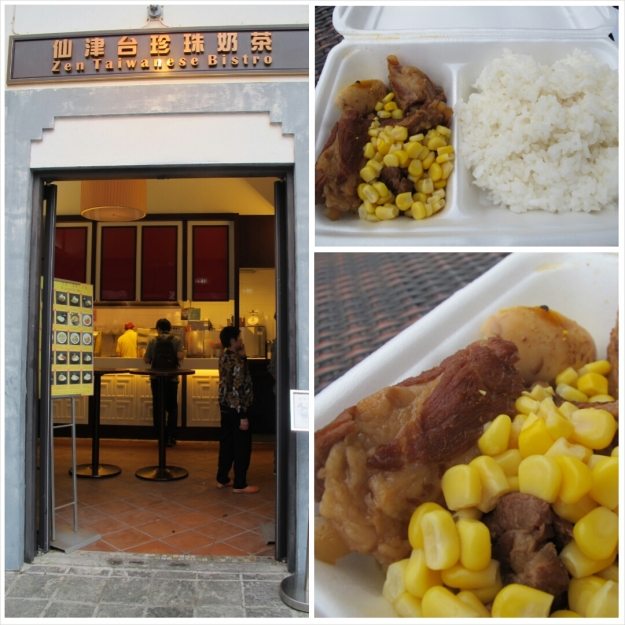 The meat was tender, but I was put off by its mostly sweet flavor.  Still, it was a filling meal.  Plus, there’s my favorite corn kernels. 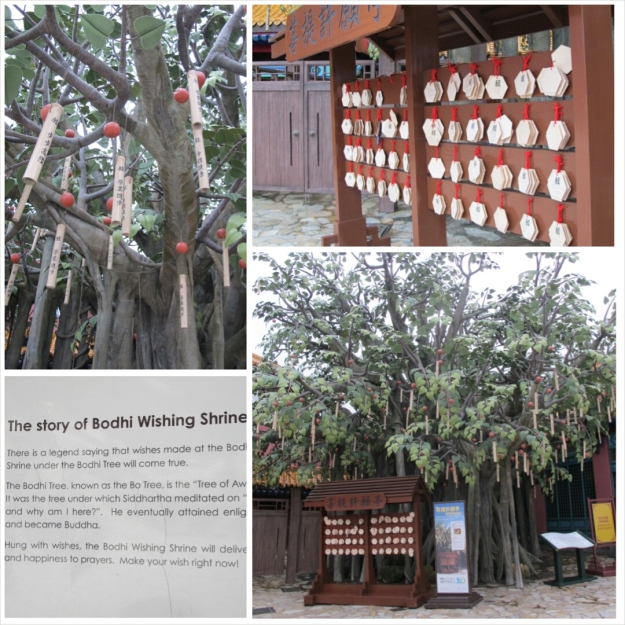 Again, I was disappointed that the tree was a mere replica but it did not stop me from wishing because I have always believed that when wishes are borne from a believing heart, even miracles can happen.

Next adventure: our climb up Tian Tan Buddha, which is a large bronze statue of Buddha Amoghasiddhi.  Unfortunately, the weather again acted up.  It was raining heavily so my friend and I decided to wait at one of the shops.

Almost half an hour later, the weather still had not improved.  We thought of foregoing our climb up the Buddha and between us, my friend was more willing to do away with our climb, but I reasoned that it would be a waste to pass the opportunity since we were already there.  And so she was forced to buy a $30 plastic raincoat (ever the girl scout, I had an umbrella and hooded jacket with me) just so she could climb up with me.

On the way, we passed by the statues of the 12 Divine Generals.  Reading through the signage per statue made me found the general that represents my year of birth (1983, Boar) in the Chinese Zodiac.

Here are photos of people climbing up the rain-drenched 240 steps leading to the Tian Tan Buddha. 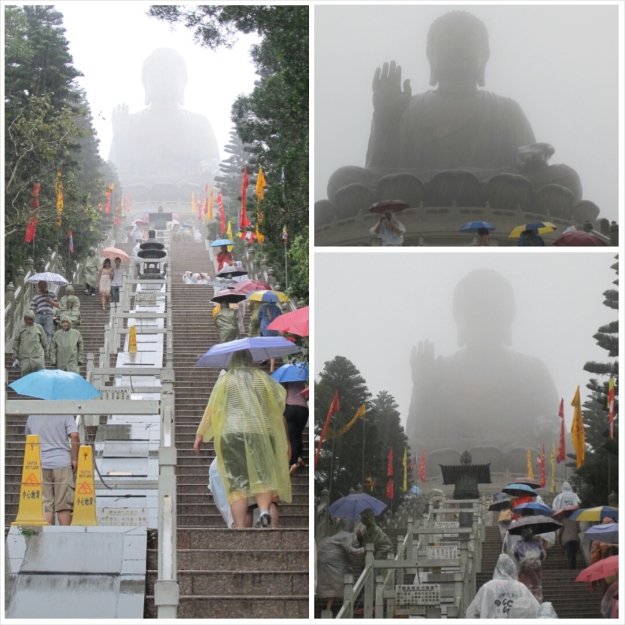 Here’s a full view of the Buddha when we reached the landing. 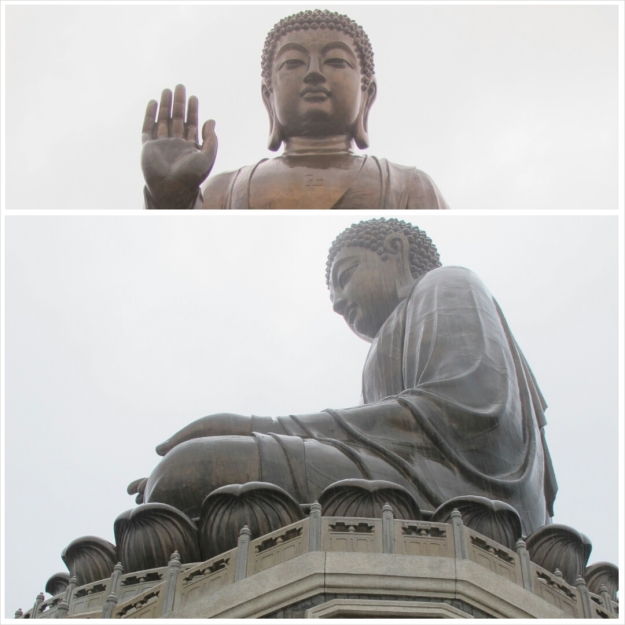 Did you know that the Tian Tan Buddha was named as such because its base is a model of the Altar of Heaven or Earthly Mount of Tian Tan, the Temple of Heaven in Beijing, and that it sits on a lotus throne?  The Buddha symbolizes the harmonious relationship between man and nature, people and religion.

The Buddha is also surrounded by six smaller bronze statues known as “The Offering of the Six Devas” that bear with them offerings of flowers, incense, lamp, ointment, fruit, and music.  These presents symbolize charity, morality, patience, zeal, meditation, and wisdom, all of which are necessary to enter into nirvana.

Too bad the view on the deck was all foggy.

Our next stop was the monastery, but ever the map-challenged, we got lost and instead found ourselves on some sort of temple with statues.

After going around for about 10 minutes, we finally found the monastery, which was under construction.  Too bad. 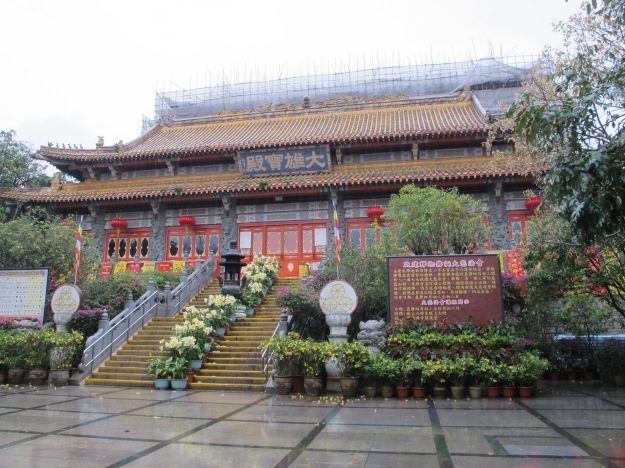 Just a trivia.  This monastery is known as the “Buddhist Kingdom in the South” built by three Zen masters in 1920.

Afterwards, we headed back to where the Tian Tan Buddha was and settled at its foot, where some sort of plaza was bedecked in flags of red and yellow.  The Buddha was very visible from here. 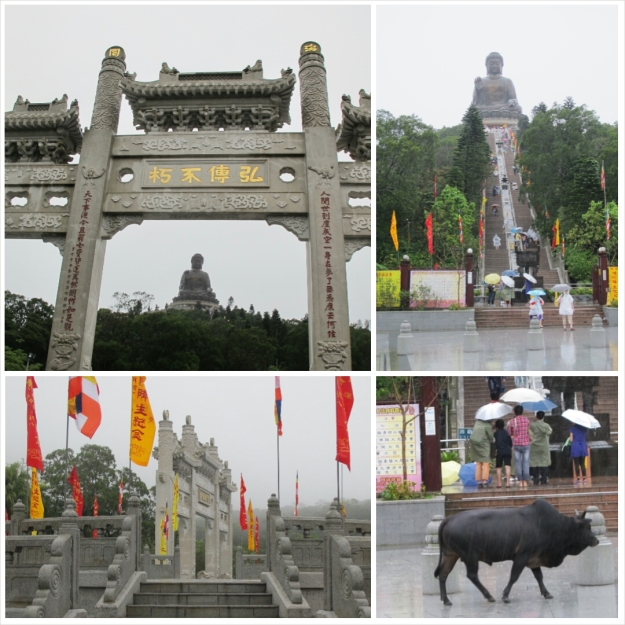 Did you notice a cow on the collage?  We were amused to see it roaming freely in the plaza.

Our final stop in Ngong Ping was the Wisdom Path.  We almost gave up going here because it was already raining rather heavily and the way there was not tourist-friendly (no one else was on the same trail and we later encountered a couple who opted to go back), but we decided it might be something worth visiting.  To get to the Wisdom Path, we navigated through the rain, mud, and trees.

The view was beautiful to me, in a haunting way.

Finally, we arrived at our intended destination, and I must admit I was again a little disappointed.  This same scene looked so beautiful in their brochure because of the vivid blue sky, but since it was rainy, it looked gloomy.  Note that I edited the photo by using a blue filter since the original looked so bleak.

The brochure stated that the Wisdom Path traces a series of 38 wooden steles (upright monuments) with verses from the centuries-old Heart Sutra, one of the world’s renowned prayers revered by Confucians, Buddhists, and Taoists alike.  The inscription on these steles were based on the calligraphy of the contemporary scholar Professor Jao Tsung-I.  The steles were arranged in a pattern that represents infinity.

Going back to the cable car station, we passed by these. 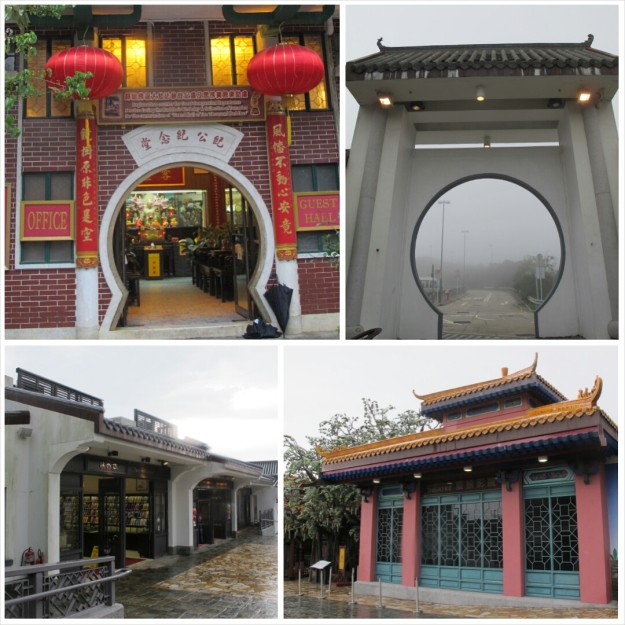 Waiting for our ride was again a test of patience.  We waited for at least an hour shivering from the cold (my jacket was soaked!), and my only consolation was that during our ride, it was already sunset so the view was lovely. 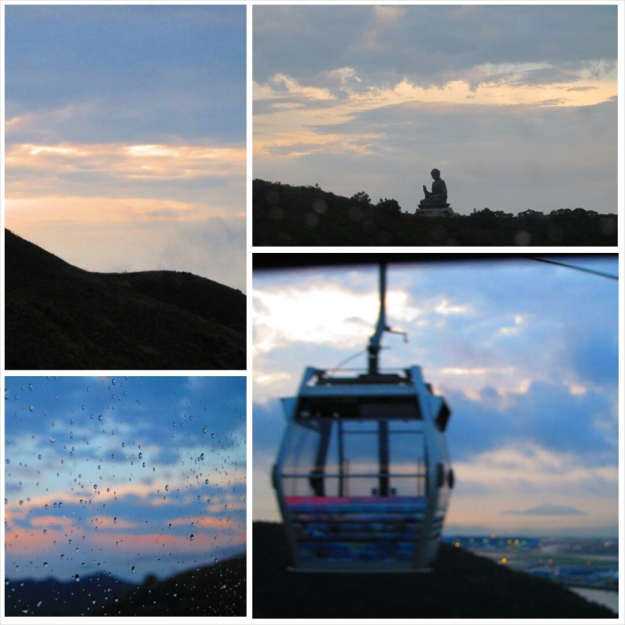 I want to end this post with photos of the Tian Tan Buddha as viewed from different vantage points around Ngong Ping.

Photos from the above collage were edited using filters from my favorite collage app, PhotoGrid.

© Posts and photos by Milai unless otherwise specified. Feel free to share, but please give credit where credit is due by linking back to my blog.
Follow Thoughts, Tales, and Whatnot on WordPress.com
Loading Comments...
Comment
×