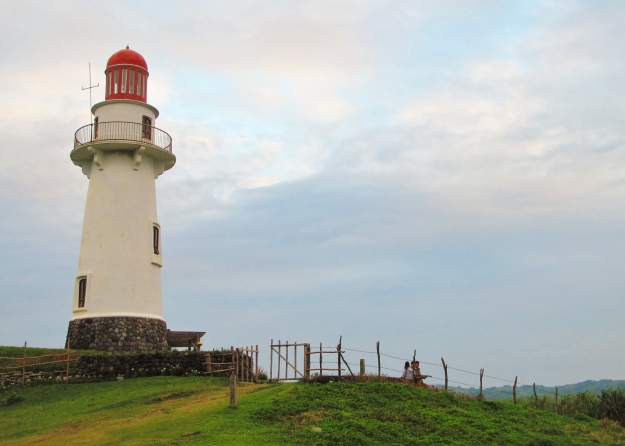 This is a late post since I did this trip nearly a year ago (though I did make a teaser post  HERE), but as the cliché goes, it’s better late than never, so here goes.

Batanes is one of my dream destinations.  I’ve been longing to visit it since I was in college (that was a decade ago, gasp!) and last year, I was finally able to make this dream a reality.

Getting Here
Only one airline was flying the Manila to Batanes-capital Basco (and vice versa) route when we made this trip, thus, the fare was sky-high. Sky Jet’s roundtrip airfare cost us about Php 16,000 (about USD 400) per person. Too expensive for a domestic travel, but worth the Batanes experience.

Flight-wise, though, it did not feel Php 16,000-worthy. The plane was too small (the smallest among the many I’ve ridden) that the flight was jarring because we felt the plane’s every move. And our flight was delayed for an hour, though it’s because of the weather. On the positive side, they served some snacks (yummy peanuts and too-sweet brownies) and the flight attendants were friendly.

Now, aside from Sky Jet, SeaAir offers trips from Manila to Basco and vice versa.

Batanes’ Basco airport is small, but charmingly built. It has no baggage carousel so we had to wait for our luggage to be offloaded from the plane and brought to the terminal before we could claim it ourselves.

Since our room rate included airport transfers, Kuya Ireneo picked us up from the airport to  bring us to Rapitan di Vasay. Travel time was about 10 minutes.

Where we stayed
We stayed at Rapitan di Vasay, which I will discuss in detail in a separate post.

Since the tour that we arranged would not start until 1 PM, we decided to spend our morning just walking around town. Rapitan di Vasay is centrally located and places of interest are just walking distance from it.

Basco Pier
Our first stop. Not that interesting since it looked abandoned. And the dreary weather wasn’t helping me appreciate the place.

At the Town Plaza

Basco’s town was laid out like most towns in the Philippines.  That is, the park, school, seat of government, church, etc. are close to each other.

We also passed by their local tourism office to ask for a brochure or map, but they didn’t have them.  Too bad.

Some interesting flora that I saw during our walk:

And this adorable goat family.

They definitely were not the least bit camera-shy since they stopped grazing and solemnly looked at us while we snapped photos.

Batan Island Tour
This is part of the 3-day tour that we arranged with Noel (+63 999 363 6845). Cost is Php 6,200 per person.  Expensive, but we recommend that you take this instead of organizing the tour yourselves.  Batanes’ points of interest are far from each other and some roads are difficult to navigate so a tour guide and/or driver are/is necessary.

Our assigned tour guide is Jun (+63 908 936 8193).  He’s very knowledgeable and is good at taking photos (what a bonus!), especially jump shots (this is the only time when most of my shots were jump shots).  I recommend that you ask for him since he also owns a tricycle thus, he can easily take you to places (he brought us to the restaurants where we had our meals) that are not included in the tour.

On the way to Mt. Carmel Chapel, we passed by Basco’s welcome signage with a shrine of the Virgin Mary. It also serves as a viewdeck of Basco’s waters and pier.

Mt. Carmel Chapel
Unfortunately, the chapel was closed during our visit so we contented ourselves with just taking photos of its exterior. 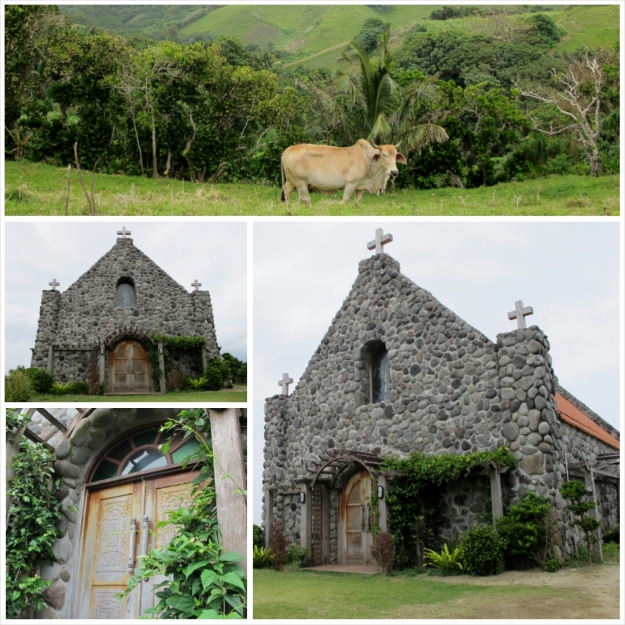 PAGASA
PAGASA stands for Philippine Atmospheric, Geophysical and Astronomical Service Administration. It is responsible for providing the Filipino people with flood, typhoon, and weather forecasts and advisories, and meteorological, astronomical, and climatological information. Batanes is usually within a typhoon’s range, so it makes sense that one of PAGASA’s weather stations is there.

It also offers a beautiful view of the rolling hills and the sea. 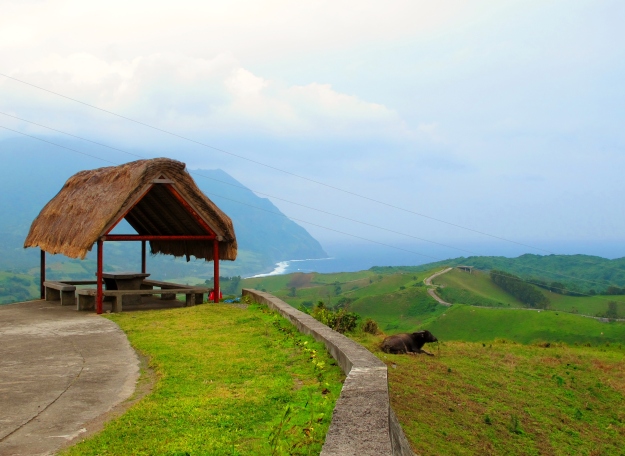 Fundacion Pacita
This is a popular seaside lodge in Batanes that used to be the home of a renowned Filipino artist (her works adorn the place).

We came back here on our 4th day for lunch, so I will just detail our dining experience (and the lodge’s interior) in a future post.

This used to be  a settlement of the Ivatans, the locals of Batanes.

We also came across a carabao (water buffalo) resting beneath an interesting tree with purple flowers.

We also chanced on other interesting flora here and Kuya Jun was nice enough to show us how the leaf of the tree with the lavender flowers could be made into a windmill.  A leaf from a variety of taro could also be made into a dipper, or an umbrella (not pictured though, since I was familiar with it because when I was child, I saw some kids in Aklan putting the leaf over their heads during the rainy season). 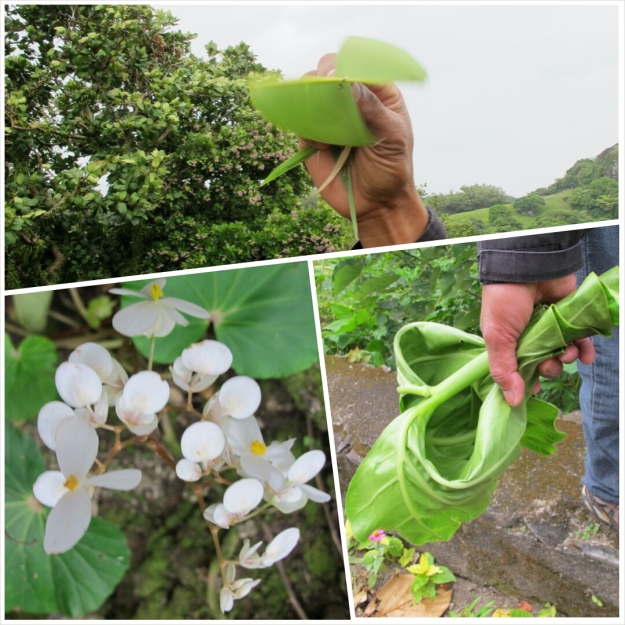 I don’t know what the plant with the white flower is called, but the flowers can be eaten (they taste sour) as demonstrated by Kuya Jun.  I’m familiar with the plant, though, and know that it also has pink and red varieties.

Japanese Tunnel
This was constructed during World War II.  Where they used to get their water then was still available, although as per Kuya Jun, they no longer drink its water, but use it to bathe their  cows or carabaos. 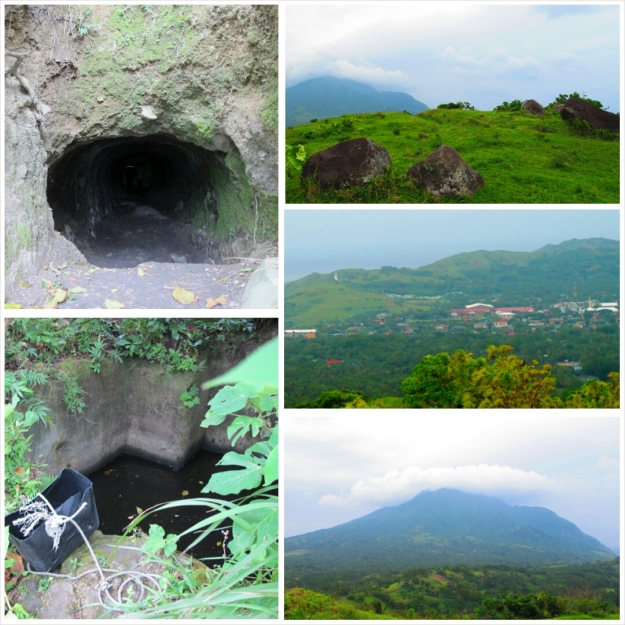 All those bending and body twisting to fit into the tunnel was tiring, but the view we got when we reached the exit was all worth it.

Just beautiful!  And unique, because instead of sand, there were boulders that came from Mt. Iraya. Too bad it’s not swim-able because of the very strong waves.

Verdant hills that look postcard-perfect. Being here made me feel as if I were not in the Philippines, a country famed for its beaches, but in a countryside somewhere in New Zealand or Europe.

Rolling Hills is also a perfect sunset spot, the details of which I will post on Day 4 of my Batanes trip.

Naidi Hills
This is where Basco Lighthouse is located. We were supposed to have dinner at Bunker Cafe (the white structure beneath the lighthouse on the upper right in the succeeding collage), but it was closed since they had no running water.

Naidi Hills also offers a sweeping view of the town of Basco (bottom right photo of the above collage). 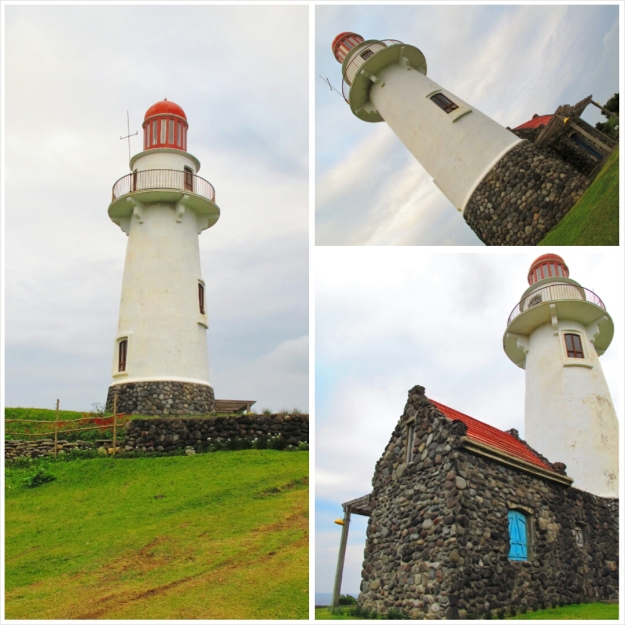 This was constructed in 2003 in the site that was originally the site of American period telegraph facilities that connected Batanes with the central government.  The facilities were destroyed by the Japanese Imperial Army bombings at the start of World War 2.

I will end this post with a solo photo of Basco’s Lighthouse.

Lighthouses are so charmingly romantic, don’t you think?